You've got to hand it to the producers of Stranger Things for using the same deus ex machina to solve the same problem three series in a row.

At least this time around there was something of a plot twist when low-key superhero and so-called ‘Gifted Child’—a moniker worthy of a New Labour policy-maker—Eleven only managed to save her friends from certain death rather than saving her friends from certain death and the universe. But all’s well that ends well and, with Eleven’s subsequent diminution rumbling on, Season 4 already has its narrative arc sorted. 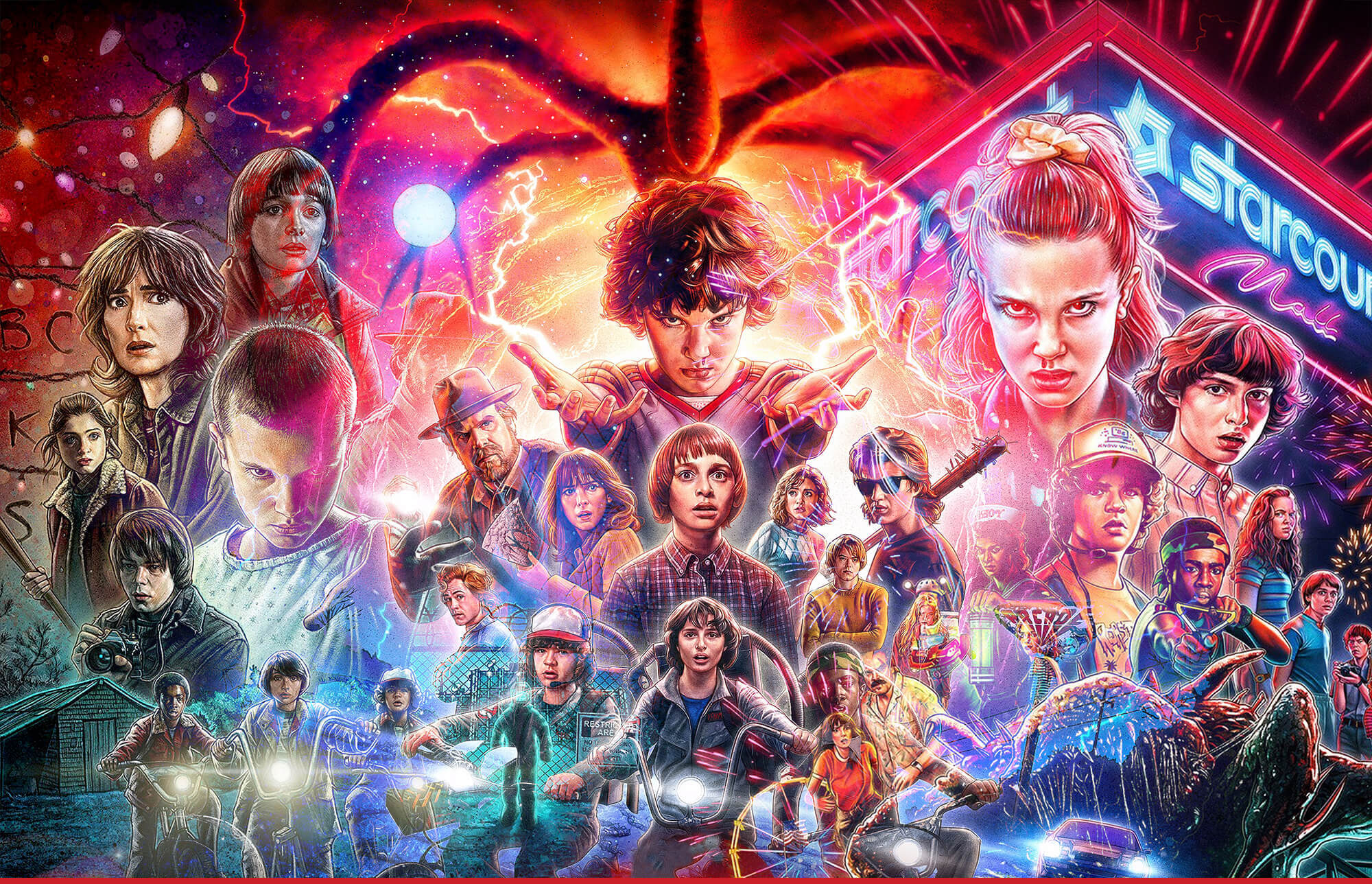 There’s a sense in which Stranger Things is so popular because it is eminently ripe for critique. After a televisual experience that beguiles you by its brilliance, the next best thing is a televisual experience in which you refuse to be beguiled. It is that feeling of self-awareness in the face of manipulation that plays a role in Slavoj Žižek’s restatement of Karl Marx’s definition of ideology: not ‘Forgive them for they know not what they do!’ but ‘Forgive them for they know exactly what they do!’ In this final iteration of the definition of ideological formation, we watchers of Stranger Things might echo Žižek and Marx: ‘Forgive them for we know exactly what they are doing!’

Of course, there are some people who argue that we don’t know exactly what the producers of Stranger Things are doing. A brief perusal through the internet search engines will throw you up any number of conspiracies about the way that Netflix created the Stranger Things franchise as a vehicle through which their ever-burgeoning data collection about people’s televisual habits might be converted into the ‘perfect’ viewing experience. By taking this data and using it as a yardstick, so the logic goes, then you can back engineer a series which will conform to the tastes of the largest possible viewership.

Appropriately enough, ‘the data’ backs this up. According to The Wrap, ‘an average-minute audience of 12.8 million viewers tuned in to Season 3 over the Fourth of July holiday weekend… up 21% from Season 2.’ Netflix themselves reported that 40.7 million accounts watched at least part of the show’s third season of which 18.2 million finished all eight episodes in the first four days following launch. Whatever else they are doing, the producers of Stranger Things would appear to be doing something right.

But isn’t there a more straightforward explanation for the perennial popularity of the show? What do E.T., Peter Gabriel, The Return of the Jedi, New Coke, Breakfast Club, Joy Division, Dungeons & Dragons all have in common? Yes, they were all big in the 80s. But they also wrap themselves around us like a comfort blanket in a world that, at least so the narratives tell us, is ‘singularly unappealing’ (VICE). The reason that Stranger Things is so popular is because of nostalgia, isn’t it?

This admission should hardly come as a shock. In the past decade, we’ve been witnessing the gradual Spielbergification of popular culture which has seen shows like Mad Men, The Americans and Halt and Catch Fire appear, the slow churn of CGI-remade Disney classics and modern extensions of shows like Twin Peaks and Fargo. In 2019, we are primed for dewy-eyed representations of the past and what better period to send us to than the 1980s?

It is tempting to make an inference about why this might be the case on a generational basis. For many of us, the 1980s represents the point at which we were just old enough to participate or old enough to live through the aftermath of its culture. But this seems reductive. Unlike almost every other immediate period available to us, the 1980s seem to have accrued a heightened sense of aesthetic significance over against, say, the 70s or the 90s. What would the 70s or 90s as an aesthetic denominator even look like? Yes, we have the music of that period but, beyond that, they bleed all too easily into what went before in the case of the 70s and what came after where the 90s are concerned. The 80s feels altogether different: a monadic outlier in the flow of the 20th century.

If pushed, I would attempt to make sense of this by making recourse to technological advancements. As technology has developed, it has brought with it a level of egalitarianism that has flattened a society that was previously tiered. With the dawning of the 80s, technology was now at a point at which the man on the street could own a Walkman or a VHS player. As we know now, though, as technology advances, it brings with it a tendency for splintering which sees culture divided into sub-cultures. In the 80s, technology was both advanced enough to allow this unification but without being so advanced that the tendency for division had kicked in. It was an exciting period in which cultural evolution occurred and everyone knew it was happening. Culture wasn’t something done by other people: it was something we were all involved in.

As for the retrospective element of our instinctual return to the 1980s, is it as simple as to suggest that we are just falling back limply to a time where the possibilities for the future seemed so myriad and positive? Certainly, it felt as though we had left the old world of global factioning behind and were on the sunny foothills that would lead us up to Francis Fukuyama’s end of history. All of a sudden, everything was new and exciting and bathed in neon light. Viewed from the vantage point of the present, the success of Stranger Things would seem like a matter of course.

We arrive at the beginning. Are we simply mindless idealogues who, if we introspect on it for long enough, are aware of the fact we are being duped by late-capitalist data farmers who are playing on our fond memories of the past? Are we well on the way to being slowly assimilated into a Matrix-like reality in which we are kept alive purely for our maximised utility? Is Stranger Things simply the final evolution of a process in which technology finally eats itself and us with it? In what remains, I want to offer a more positive reading of Stranger Things in which, regardless of the intentions of its producers, it could be viewed as accruing a meaning beyond its immediate intention.

Extending this logic to the idea that each series of Stranger Things sees the same problem solved by the same deus ex machina, it starts to become apparent that the series should perhaps be read as a fairytale for adults. In the case of the majority of children’s stories, the plot functions less as an end in itself as a container for some deeper notion: every story has to have a moral. If this is the case, then we should spend less time critiquing the plot of Stranger Things—who critiques the plot of a fairytale after all?—and more time trying to divine the moral of the story we’re being told?

When it comes to the third series, many of these morals are little more than the saccharine-infused ‘love conquers everything’ mantras that, let’s face it, are a staple of the children’s story genre. In this sense, it’s easy enough to let them pass as fundamental to the canon. But there are more interesting questions being asked by the writers through the course of Season 3.

Primarily, the third season is interested in the notion of moving on. These themes are explored in the relationship between Jim Hopper and Joyce Byers - both of whom have lost partners to death. Neither Hopper nor Joyce seem unable to give themselves to each other and they end up hiding behind their feelings to the point that everyone else knows about their feelings but themselves. This is overlaid throughout the episodes of season three by the Mike Wheeler-Eleven relationship in which the opposite problem emerges: young lovers give themselves up too easily and end up giving up on other relationships in the process. The series ends with Hopper and Joyce separated and Mike and Eleven separated with the inference being that absence is as fundamental to relationships as presence.

This comes to a head in the final paragraph of Hopper’s letter to El, written before he ‘died’ but delivered afterwards:

But I know you’re getting older, growing, changing. I guess, if I’m being really honest, that's what scares me. I don’t want things to change. So I think maybe that’s why I came in here, to try and make stop that change. To turn back the clock. To make things go back to how they were. But I know that’s naive. It’s just not how life works. It’s moving, always moving, whether you like it or not. And yeah, sometimes it’s painful. Sometimes it’s sad. And sometimes, it’s surprising. Happy.

So you know what? Keep on growing up kid. Don’t let me stop you. Make mistakes, learn from ‘em. When life hurts you, because it will, remember the hurt. The hurt is good. It means you're out of that cave.

So, there’s your moral. If you learn something from that then perhaps the ambulatory plot line, the complete evacuation of suspense and the fact that too many of the scenes feel like retro-active product placements can be forgiven.

But here’s the thing: as I was watching that final scene, I couldn’t get the idea of the intrinsic nostalgia of Stranger Things out of my mind. The whole premise of the franchise, as we have seen, is about tapping into the nostalgic tendencies of an audience. And yet, the moral of the story in season three is all about the deleterious effects of nostalgia: not moving on, becoming comfortable, avoiding discomfort. In fact, you could read the whole of series three as self-critique of Stranger Things: a laying bare of the nostalgic impulses that are the sine qua non of the series.

Maybe that’s why we watch Stranger Things, to try and stop that change? To turn back the clock. To make things go back to how they were. But we know that’s naive. It’s just not how life works. It’s moving, always moving, whether we like it or not.

It’s all too easy to pass cultural artefacts off as predictable or laughably unaware of themselves. But sometimes these cultural artefacts can obtain an unintentional meaning which carry them beyond the scope of their creators’ intentions. Watching as cynically-produced a series as Stranger Things might raise questions in your head about the usefulness of the whole endeavour. But the magical realist quality of Stranger Things offers its own propaedeutic. Perhaps, in watching it, the show will take on a life of its own and move you beyond its limitations?

Jon Mackenzie is a freelance writer and author who has bylines in the Economist, the i Paper and the Blizzard, amongst others. He is currently writing a book on Marcelo Bielsa, the Leeds United manager.