He obtained a Ph.D. in Political Science from the University of California, Berkeley, where he studied under the late Kenneth Waltz, a man widely regarded to be one of the most important figures of post-war International Relations (IR). Walt went on to teach at Princeton University and Chicago University and served as a Resident Associate of the Carnegie Endowment for Peace and a Guest Scholar at the Brookings Institution. He is currently the Robert and Renee Belfer Professor of International Affairs at Harvard University’s John F. Kennedy School of Government. He is also an editor for Foreign Policy, Security Studies, International Relations, and Journal of Cold War Studies.

Walt’s 1988 monograph, The Origins of Alliances, added nuance to structural realism, establishing him as an influential thinker in IR circles. Since then, he has written several well-received books. 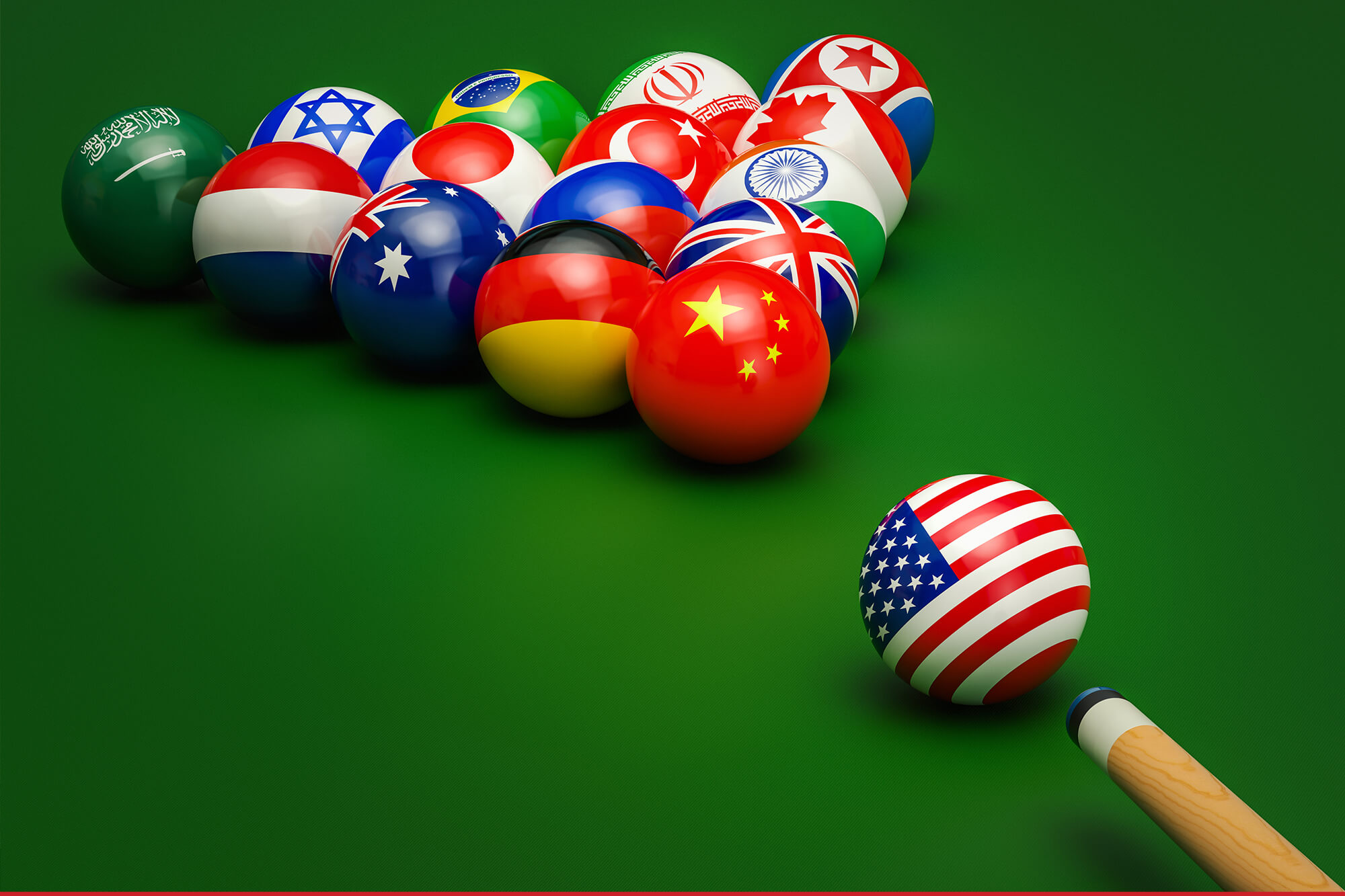 At the risk of sounding glib, would it be possible to summarise your thinking about American statecraft specifically and international relations more generally in a few sentences?

I’m a realist, and that informs my views on U.S. statecraft. Realists believe that states are the key actors in world affairs, and that the absence of an effective world government forces major powers to compete for security and advantage. Domestic politics, norms, interdependence and the like are not irrelevant, but the distribution of power is still the most important factor shaping what states do. As for American statecraft, I believe the United States is still the most powerful single state in the world, and its geographic position in the Western hemisphere also means it is far more secure than any of its rivals. The central task of U.S. foreign policy, therefore, should be to maintain a dominant position in its own region and to prevent a “peer competitor” like China from dominating Asia, so that it cannot project power around the world with impunity. But the United States should stop trying to spread its own values through military power or other coercive means, and instead promote them abroad primarily by setting a better example at home.

You are one of the most prominent realist scholars in the world, but ‘realism’ means many things to many people—where do you situate yourself in this broad church of ideas?

Realism is a broad perspective on international affairs; there are many competing theories within it, and realists don’t agree on all policy issues. I’m not a strict “structural” realist like my mentor Kenneth Waltz or my occasional co-author John Mearsheimer because I place greater weight on geography, military doctrines, and perceived intentions than they do. I am sometimes labelled a “defensive realist” based on some of my early writings, but that label doesn’t really capture my worldview completely. It is also important to remember that realism isn’t a religion or nationality or a club one joins; it is simply a theoretical perspective that tell us a great deal about international politics. But it doesn’t tell us everything, and I’m happy to use other theories or to focus on domestic politics if it is more useful in a particular case. I tend to start with realism, however, because I find it the most useful despite its limitations. I sometimes say that “realism is the worst theory of world politics, except for all the others.”

Realists see international politics as a deadly serious business, and also as a realm replete with tragedy, because even states that merely want to be left alone and at peace may have to fight in order to survive. A realist foreign policy focuses on maintaining favourable balances of power, placing little faith in law, norms, or institutions to safeguard core national interests. A realist foreign policy also seeks to pass costly burdens onto others whenever possible, and it is wary of ambitious crusades to remake the world according to some ideological vision. Although realists believe conflict and competition are inescapable, they also recognize that military power is a crude instrument and that war is inherently uncertain and generates vast unintended consequences. Accordingly, most realists favour a more restrained foreign policy than the one the United States has been pursuing in recent years. We believe war should be a last resort and not a first impulse.

In 2002, you and two dozen other international relations scholars published an open letter in the New York Times entitled ‘War With Iraq Is Not in the U.S. National Interest’. If Western military interventions in the Middle East and elsewhere have been as catastrophic as you suggest, why do you think decisionmakers are still so quick to resort to military force to achieve their objectives? And why, for that matter, do you think they harbour the same objectives as they did when you signed that letter?

Both Democrats and Republicans are quick to resort to force for one simple reason. Because the United States is so powerful, it can attack weak states with near-impunity and not suffer serious consequences back home. As a result, politicians have trouble resisting the temptation to try to solve problems with force, even if doing so is unlikely to work. Just look what happened to Barack Obama: he was elected in part because he opposed the Iraq War, but as president he sent more troops to Afghanistan and intervened to topple Muammar Gaddafi in Libya. A second reason is the American belief that liberal democracy is really the only truly legitimate form of government, which leads us to think that foreign populations will be grateful if we bring it to them. This is a very naïve and ahistorical belief, but it is deeply wired into U.S. political culture, especially within the foreign policy elite.

A few months before the Japanese attack on Pearl Harbour, Henry Luce presciently announced the arrival of the American Century. To whom does the 21st century belong?

I don’t know. I’m tempted to say that no single country will dominate the next century, and it’s worth remembering that the United States was hardly unopposed during the latter half of the 20th century.  The United States and China will be the two strongest states for the next several decades—and quite possibly beyond—but a century is a long time.

What impact, if any, do you think AI and killer robots will have on American foreign and defence policy in the coming years?

I don’t think either will have “dramatic” effects on our foreign policy. These capabilities will provide us with some useful tools, but technology does not by itself determine national interests or broader political objectives. The invention of nuclear weapons had important effects on world politics, but it didn’t stop international conflict or change the fundamentally competitive nature of international relations. I don’t think AI or robotics will either. I might add that our ability to forecast the impact of changing technology is notoriously poor, so I could easily be wrong about this issue.

What is the biggest foreign policy challenge in the next decade or so?

I am most worried about the growing dysfunction within democratic societies and the declining legitimacy of democracy itself. You see it in the Trump phenomenon in the United States, the Brexit calamity in the UK, the Orban regime in Hungary, or selection of Boris Johnson as British PM. The very concept of truth is under siege in liberal societies, leaders are openly pandering to our worst instincts, and publics are increasingly disenchanted with democracy itself. It is a remarkable turn of events, especially when you consider the self-congratulatory hubris that followed the fall of the Berlin Wall, the collapse of communism, and the (brief) triumph of liberal democracy.

And finally, what advice would you give to young people who are thinking of pursuing a career in academia?

I’d offer three pieces of advice. First, do it because you really love the subject, and genuinely enjoy spending time thinking hard about difficult problems. Second, do your absolute best to write clearly and efficiently, so that it is easy for readers to understand what you are trying to say. Being a good teacher and a helpful colleague are important, but the main task of an academic lies in coming up with new idea or interpretations or discoveries and then communicating them to others as effectively as possible. Lastly, don’t be afraid to tackle controversial topics, even if it makes you unpopular with some people. Taking on big and controversial subjects and challenging taboos is part of our job, and it is one reason academics are granted tenure. The opportunity to say what you truly think without worrying about being fired shouldn’t be wasted, and well-trained academics may be the last line of defence in a world where “truth” is determined by the loudest voices.

Stephen M. Walt is Robert and Renée Belfer Professor of International Affairs at the Harvard Kennedy School. He is a contributing editor at Foreign Policy, co-editor of the Cornell Studies in Security Affairs, and was elected a Fellow of the American Academy of Arts and Sciences in May 2005. He received the International Studies Association’s Distinguished Senior Scholar award in 2014. His writings include The Origins of Alliances 1987), Revolution and War (1996), Taming American Power: The Global Response to U.S. Primacy, and The Israel Lobby and U.S. Foreign Policy (co-authored with John J. Mearsheimer, 2007). His latest book is The Hell of Good Intentions: America’s Foreign Policy Elite and the Decline of U.S. Primacy (2018).