From the Archive: The Paris Peace Conference and Upper Silesia

From the Archive: The Paris Peace Conference and Upper Silesia

Our popular primary source collection, 'Paris Peace Conference and Beyond, 1919-1939', provides a wealth of archival material relating to the tumultuous period in the aftermath of the First World War. The Paris Peace Conference was the formal meeting of the victorious Allied diplomats to agree peace terms to be imposed on the vanquished Central Powers. The conference resulted in a series of treaties that crafted a new international order. The first agreement, the Treaty of Versailles, formally ended the conflict of the First World War in 1919. As a result of the Treaty of Versailles, an embittered Germany had to accept responsibility for the war, make territorial concessions, disarm, and pay reparations to the victors.

One of the most fascinating documents in our Paris Peace Conference collection boasts a series of excellent European maps. These maps detail the territorial boundary shifts that the Treaty of Versailles became infamous for. Using this comprehensive map collection in conjunction with foreign office documents, researchers can study how the Treaty of Versailles impacted local communities in the years after the First World War.

As part of the peace treaty the independence of Poland was restored, which became known as the Second Polish Republic. Germany was made to cede any territory which was deemed to have a polish ethnic majority, which ultimately included part of Upper Silesia, the Province of Posen, and the so-called Polish Corridor in the region of Pomerelia.

The map below, named ‘Partitions of Poland’, highlights historic boundaries of Polish territory, drawn up in 1772 and renegotiated in 1815 at the Congress of Vienna. This map gave contemporary negotiators, as well as present day researchers, context regarding the numerous boundary shifts in Central Europe over the preceding centuries. After several regional conflicts, the boundaries of the newly formed Second Polish Republic were formalised by the League of Nations in 1922. 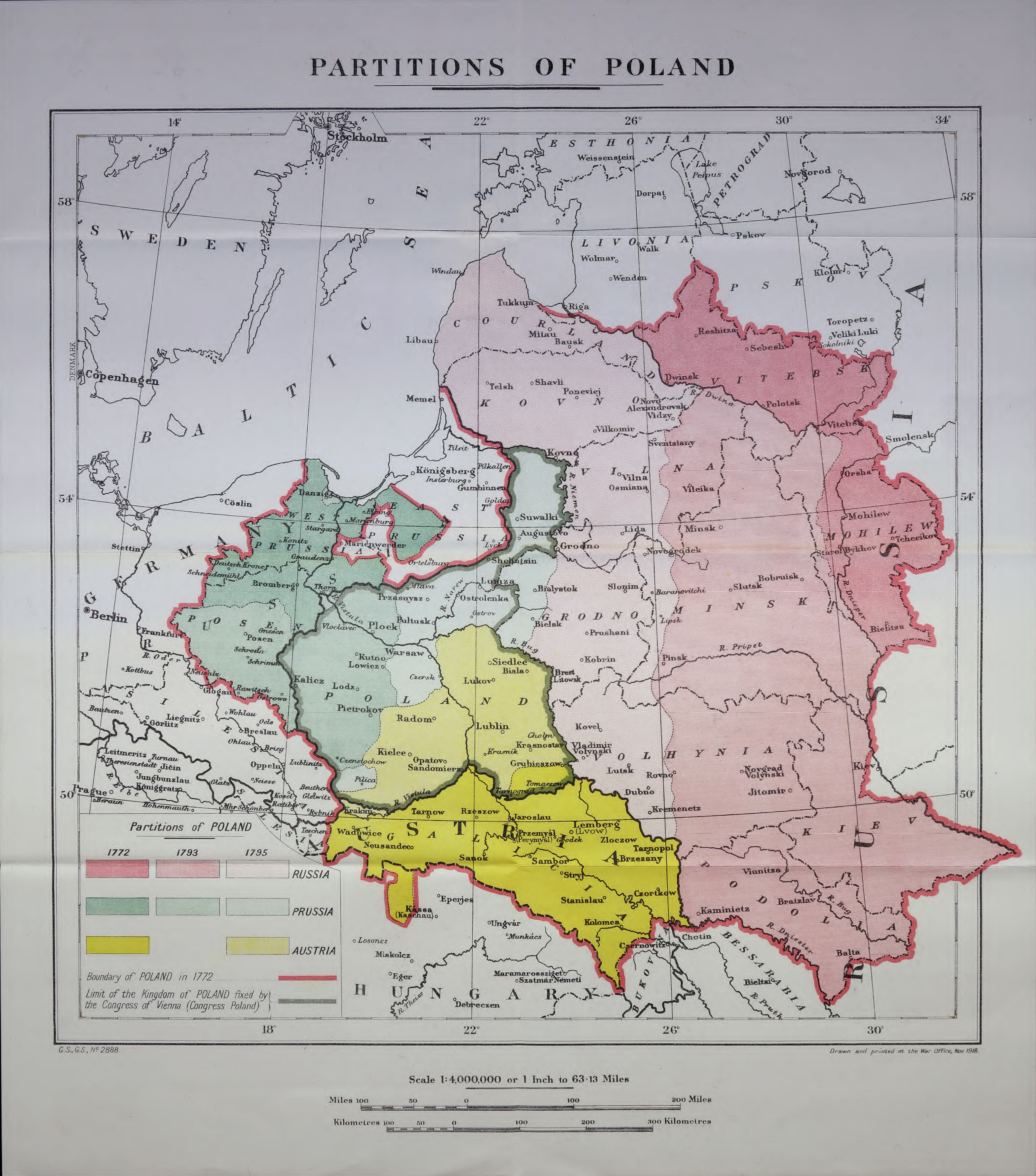 The foreign office map below, ‘Ethnological map of Central and Southern Eastern Europe’, examines considerations of ethnicity in each geographical region. This map was used during the territory negotiations of the Paris Peace Conference, allowing delegates to analyse percentage ethnicity for different areas and decide where best to put borders. 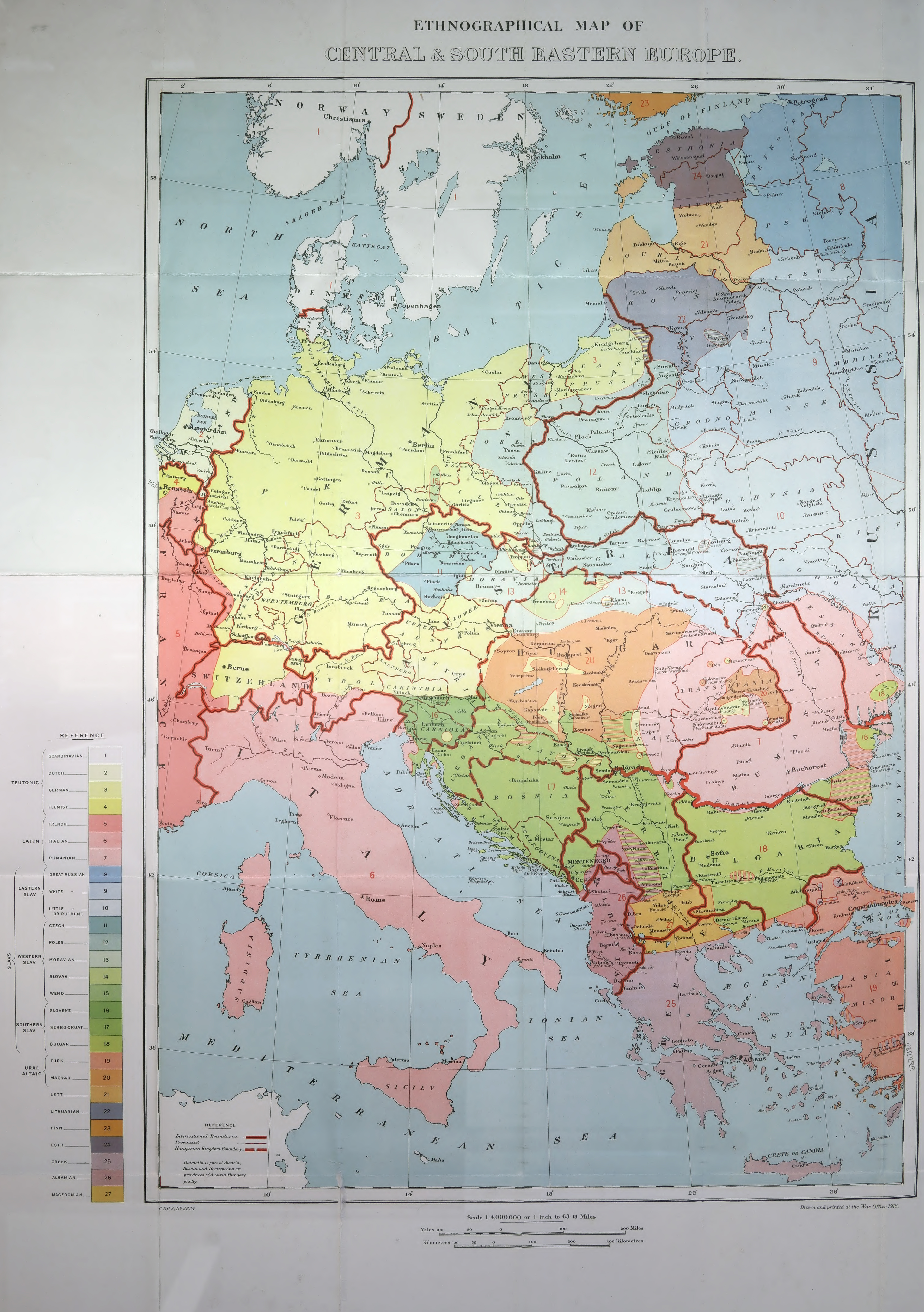 This essay will examine the effect of the Treaty of Versailles on the region of Upper Silesia. As can be seen on the ethnological map, Silesia was inhabited almost equally by Poles and Germans, because of this it was decided that Upper Silesia would be subject to a plebiscite to determine a border between Weimar Germany and Poland. Upper Silesia was part of Germany at the time, the plebiscite date was set for 20th March 1921, and the German administration would remain in place until then.

An Inter-Allied Commission, controlled by delegates from the principal Allied and Associated Powers, was established to administer the plebiscite in Upper Silesia. The commission oversaw battalions of British, French and Italian forces. The foreign office document below shows a letter from the British Government to the Secretary General of the Peace Congress regarding the appointment of a British delegate to the Commission for the administration of plebiscites in Silesia. 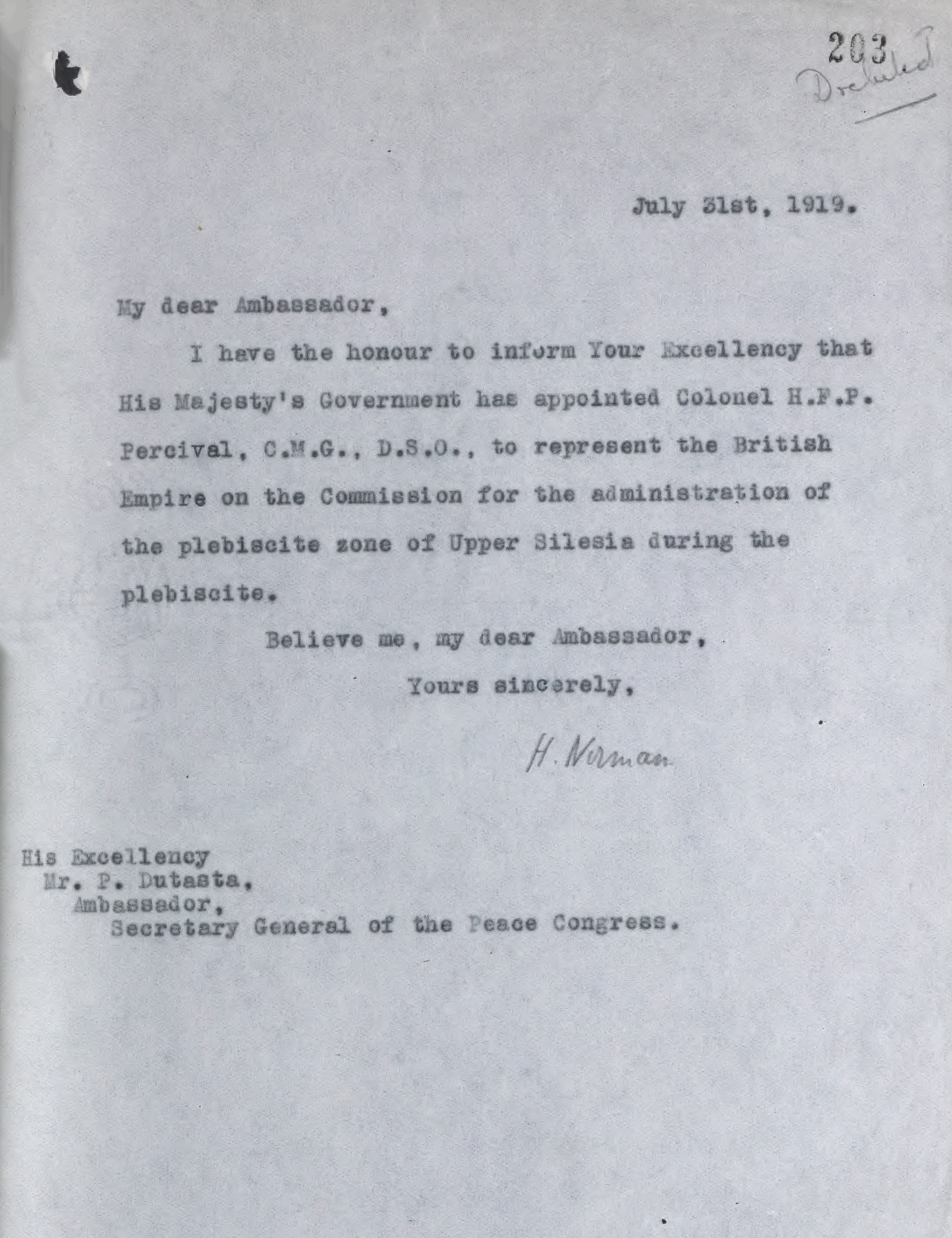 Documents within foreign office files show that the Allied powers researched precedents set from past plebiscites. As can be seen from the below image, booklets were printed to aid research into historical plebiscites and inform delegates of the best way to proceed. 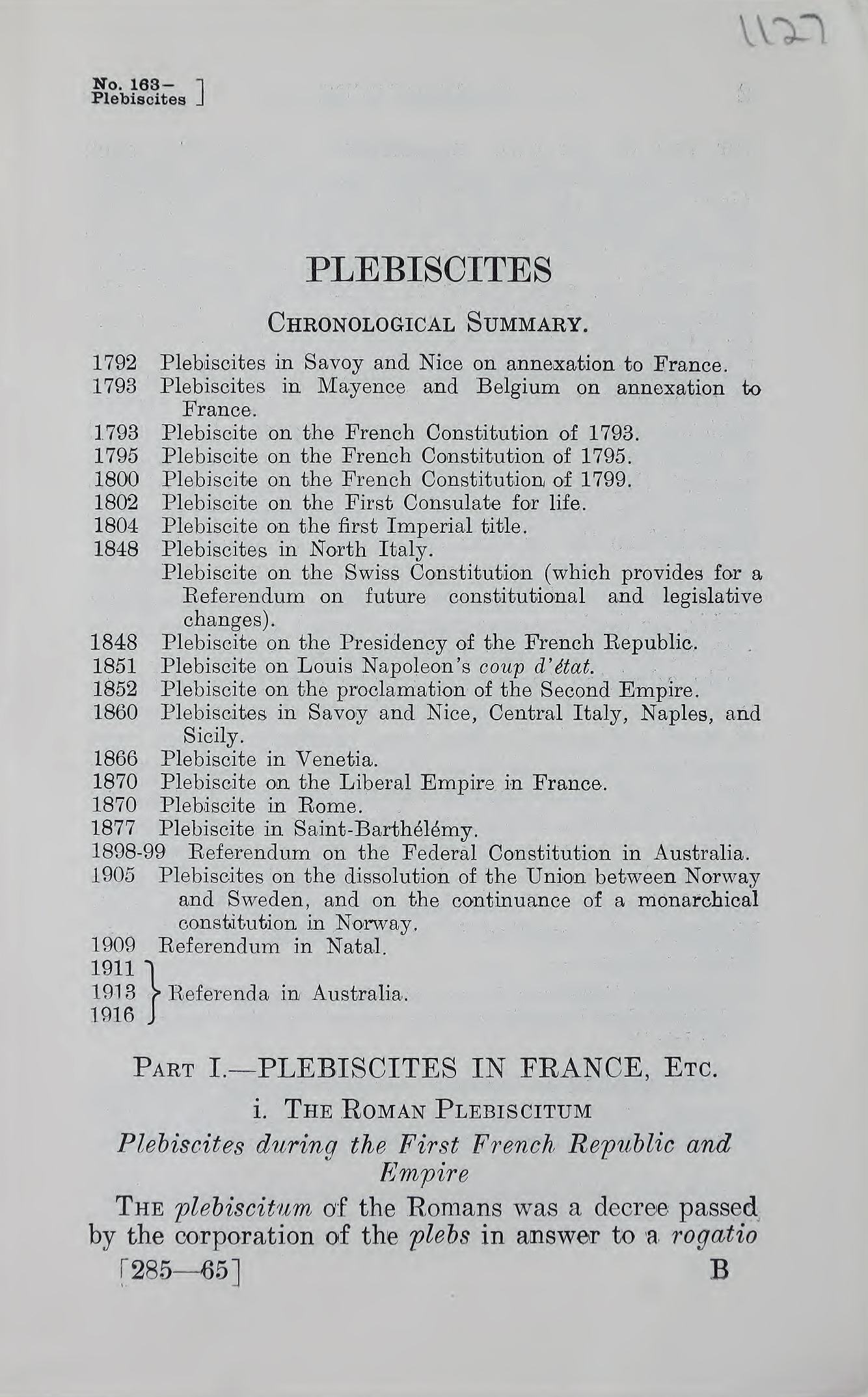 The period of the plebiscite campaign in Upper Silesia was marred by violence, propaganda campaigns, and a lack of order. Inter-Allied occupation was not enough to keep peace in the region. In the foreign office document below some of the challenges of holding a plebiscite of self-determination become clear. The possibility of sabotage by the German Government was a constant concern. 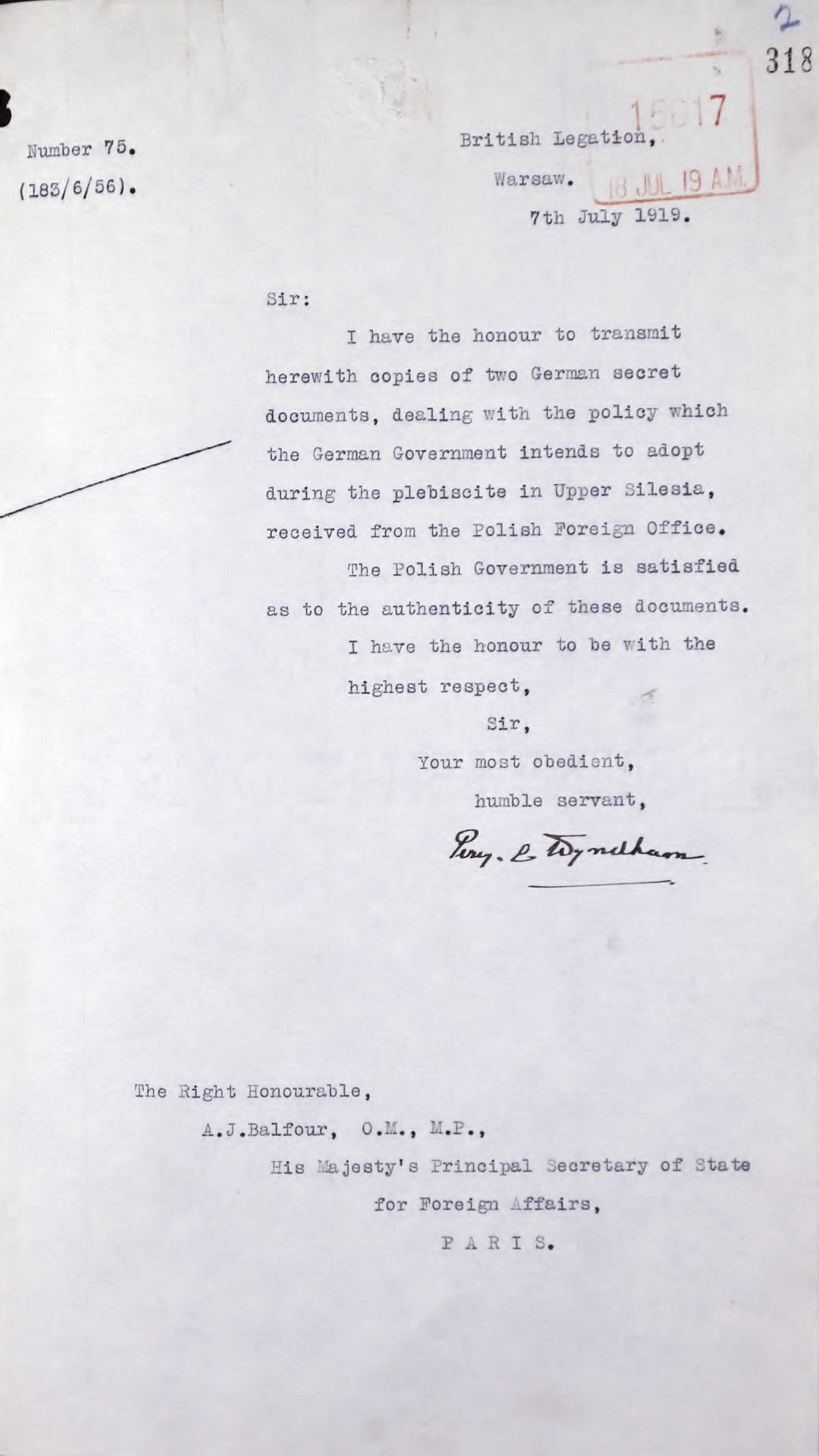 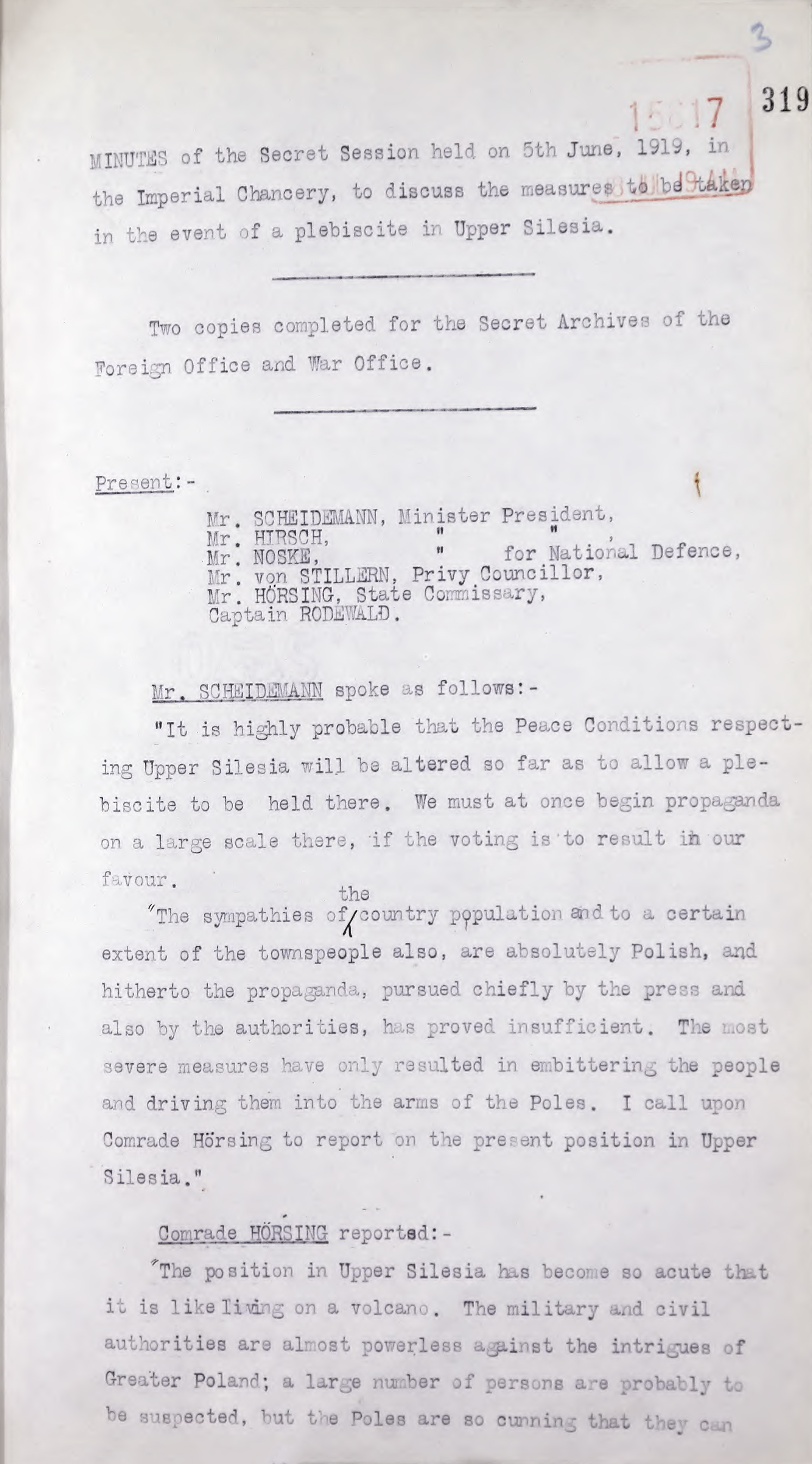 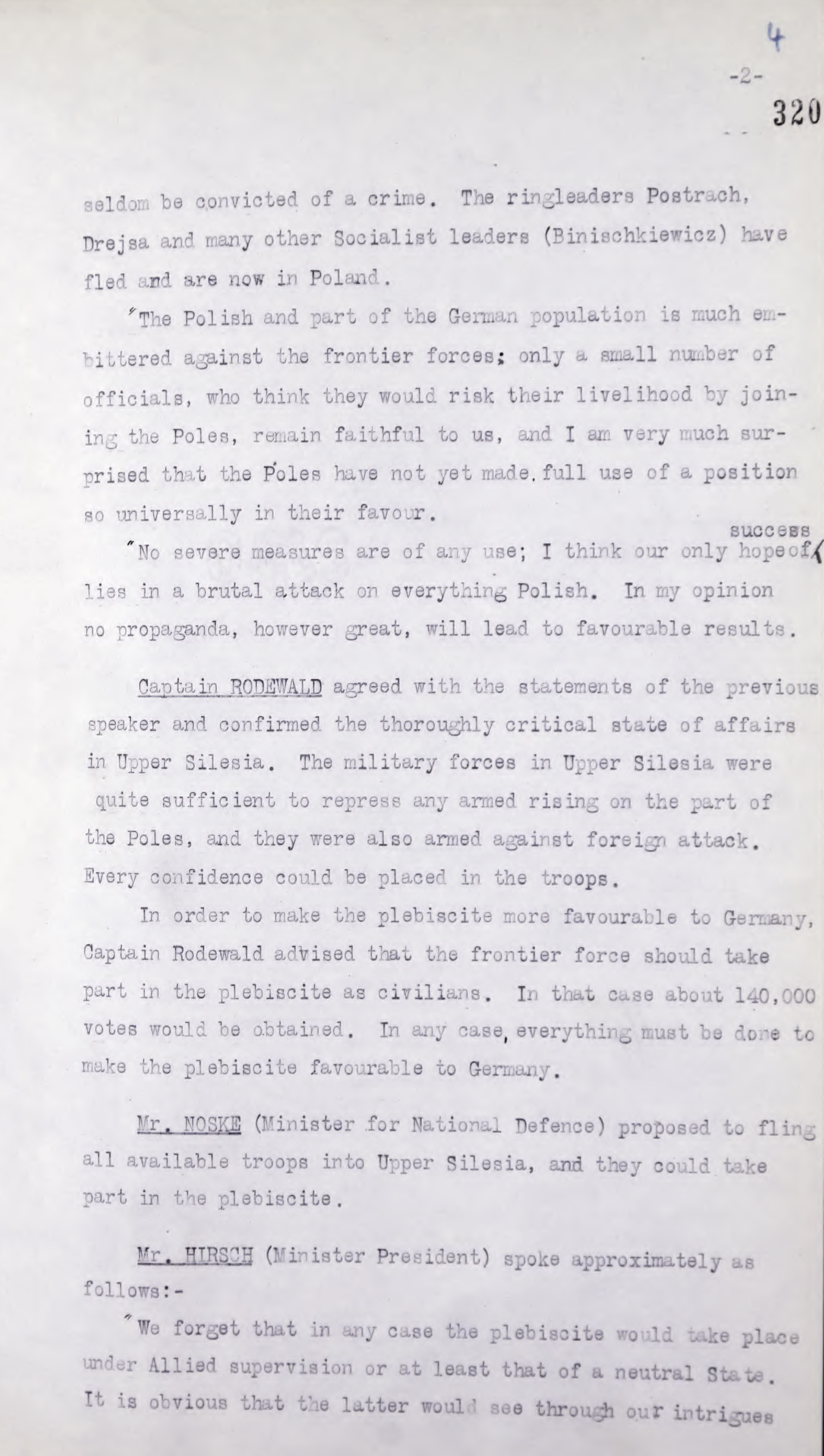 The documents above suggest that the German Government would not cede former Prussian Poland, particularly Upper Silesia, without a struggle. This document was sent from the Polish Foreign Office to the British Government’s Secretary of State, Arthur Balfour. The papers are believed to be copies of secret documents belonging to the German Government regarding the policies that would be adopted during the plebiscite campaign in Upper Silesia. German State Commissary, Comrade Horsing describes the tumultuous atmosphere in Silesia as ‘a volcano’. Policies discussed purportedly include a large-scale propaganda campaign, ‘a brutal attack on everything Polish’, and the possibility of placing ‘all available troops into Upper Silesia…to take part in the plebiscite’.

The suggestion in the document above of tactically moving citizens into plebiscite areas to attempt to swing the vote was realised. It was ultimately decided that the right to vote should be granted to all aged 20 and above who lived or were born in the plebiscite area. This resulted in mass migration of both Germans and Poles.  German new voters accounted for 180,000 votes compared to only 10,000 Polish new voters. Without newcomers the pro-German majority would have been cut from 230,000 votes to 60,000 votes.

Allied governments also discuss the possibility of sabotage in the valuable mines and factories of Upper Silesia if the plebiscite was unfavourable to Germany, and how reparations for any damage could be ensured. The below letter is regarding the ‘Krol’ mine, where German sabotage could leave a possible 10,000 men out of work if the mine were to be destroyed. 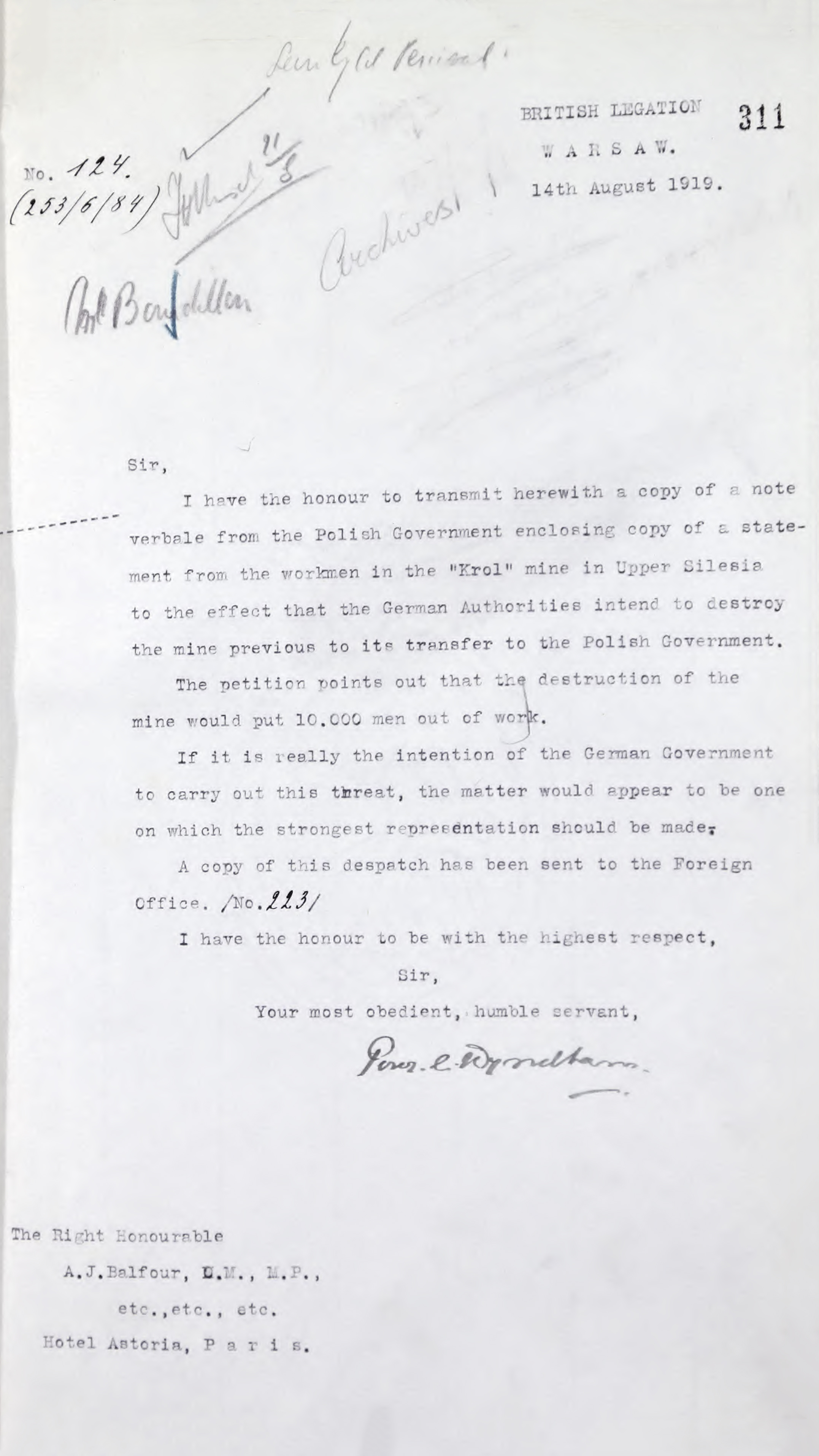 Ultimately inter-Allied occupation was not enough to keep peace in the region. An enlightening letter from Winthrop Bell to Arthur Balfour shines light on what it was like on the ground in contested territories before the plebiscite. Winthrop was a Canadian who was held in a civilian internment camp at Ruhleben in Germany for most of the First World War. After his release from Ruhleben, Bell travelled to England where he met Canadian Prime Minister Robert Borden. Bell agreed to gather intelligence in Germany because of his knowledge of the language and country, he sent back regular reports until November 1919. The below document is one of Bell’s reports from Upper Silesia in July 1919. 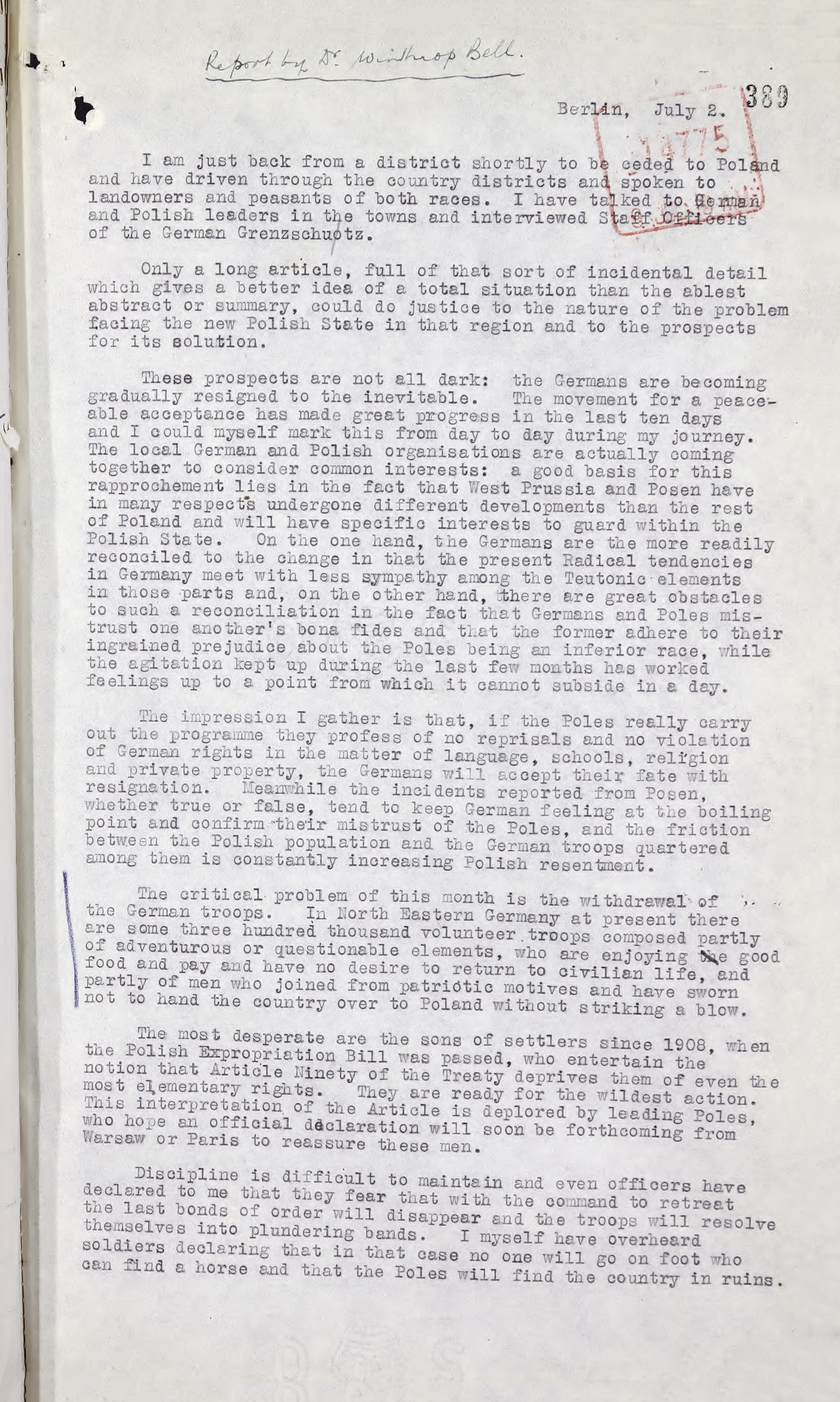 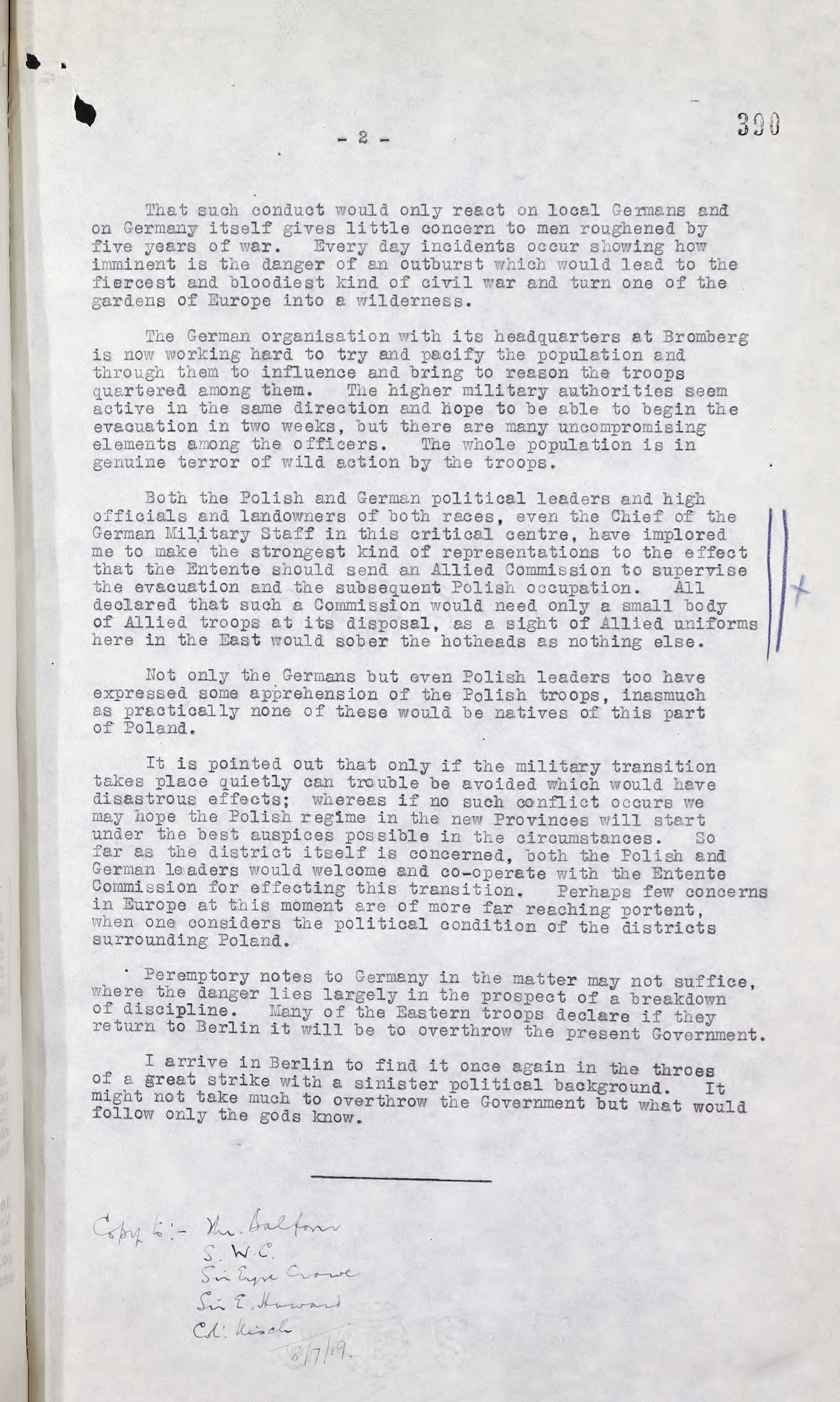 Bell explains the depth of feeling on both sides of the ethnic divide in Upper Silesia and argues that reconciliation will not be easily achieved, ‘Germans and Poles mistrust one another’s bona fides and… the former adheres to their ingrained prejudice about the Poles being an inferior race’. Meanwhile rumours of clashes in other territories added fuel to the fire, ‘incidents reported from the Posen, whether true or false, tend to keep German feeling at the boiling point and confirm their mistrust of the Poles.’ An ingrained suspicion was palpable in the years after the ceasefire.

On top of the tense, mistrustful atmosphere between the Poles and Germans, the Inter-Allied Commission had many other problems to contend with during the process of organising and overseeing the plebiscite. Bell argued that ‘the critical problem…is the withdrawal of German troops…who are enjoying good food and pay and have no desire to return to civilian life'. Furthermore, German troops are '[composed] partly of men who joined from patriotic motives and have sworn not to hand the country over to Poland without striking a blow’. This adds flesh to the worries of Allied governments in document FO 608/71/22 regarding German sabotage in Upper Silesia. Bell further expresses that ‘discipline is difficult to maintain and even officers have declared to me that they fear that with the command to retreat the last bonds of order will disappear and the troops will resolve themselves into plundering bands’.

Winthrop Bell further warns that ‘every day incidents occur showing how imminent is the danger of an outburst which would lead to the fiercest and bloodiest kind of civil war’. This report was written on the 8th July 1919, just one month before the outbreak of a bloody civil war. German border guards slaughtered ten Silesian civilians in a labour dispute at the Myslowice mine. This massacre sparked the first Silesian uprising against German control of Upper Silesia. In total there were three Silesian uprisings that were part of a bloody civil war that lasted until the dispatch of six battalions of Allied troops, and the disbandment of the local guards, in 1921.

The plebiscite in Upper Silesia eventually took place in March 1921, a majority of 59.4% voted against merging with Poland and a minority of 40.6% voted for, with clear lines dividing Polish and German communities. After this referendum the Allied Supreme Council was still unable to come to an agreement on the partition of the Upper Silesian territory on the lines of the plebiscite. Ultimately the question was handed over to the Council of the League of Nations, who unequivocally split Upper Silesia with 73% to Germany, 25% to Poland and 2% to Czechoslovakia.

Using a combination of maps and foreign office documents, a researcher can build a multifaceted understanding of what was happening in territories such as Upper Silesia after the Treaty of Versailles was signed. Furthermore, with the benefit of hindsight a researcher can study the impact of the Paris Peace Conference in shaping the 20th Century. The discontent revealed in these documents builds a picture of why Polish Silesia was among one of the first territories that Nazi Germany occupied two decades later. Our excellent map collection is a jumping board into understanding the complex territorial challenges that ultimately changed the face of Europe after the First World War.