Our exciting new collection, Transatlantic Civil Society in Periodicals, 1767-1925, explores the evolving relationship between North America and Europe over three centuries. A period that encompasses the conflict of the American revolutionary era through to changes wrought by industrialisation and the First World War. The collection contains twenty-one American journals, magazines, and trade papers published in the United Kingdom and continental Europe. In general, the periodicals were aimed at American travellers and residents in Europe, providing a guide to émigré society, news from North America, advice for tourists, or all three. 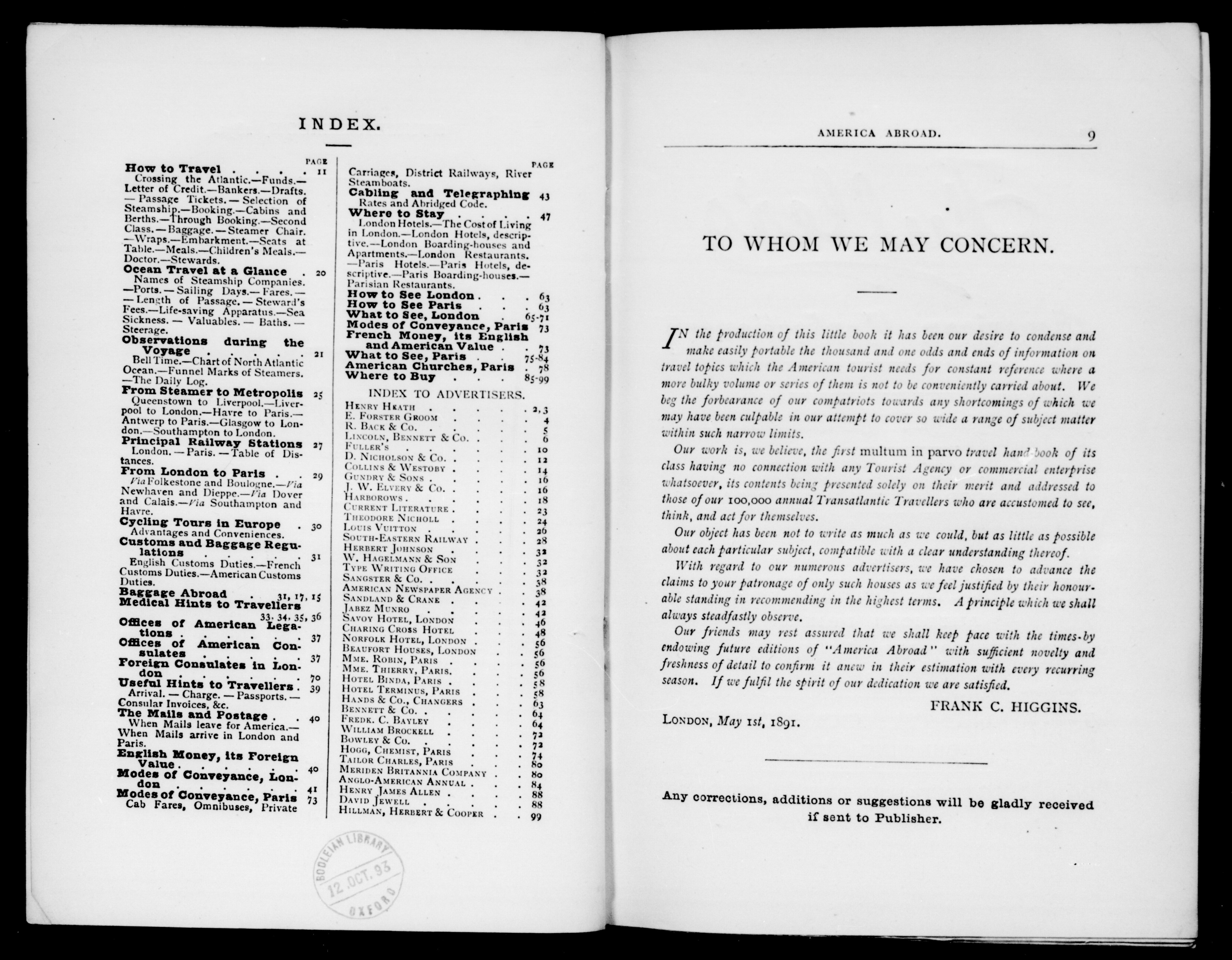 This essay will examine one of the periodicals that has been digitised: America Abroad, 1891-1907. This periodical is an annual handbook for American visitors and emigrants in Europe. Published from 8 and 9 Essex Street on the Strand, the editor explained that ‘In the production of this little book it has been our desire to condense and make easily portable the thousand and one odds and ends of information on travel topics which the American tourist needs’. Researching this periodical uncovers a wealth of information, including: the technological advancements of the second industrial revolution, the increasing ease of Transatlantic passage, the desires of a growing number of tourists and expatriates crossing the Atlantic, as well as the importance that cultural exchange had in shaping both continents. 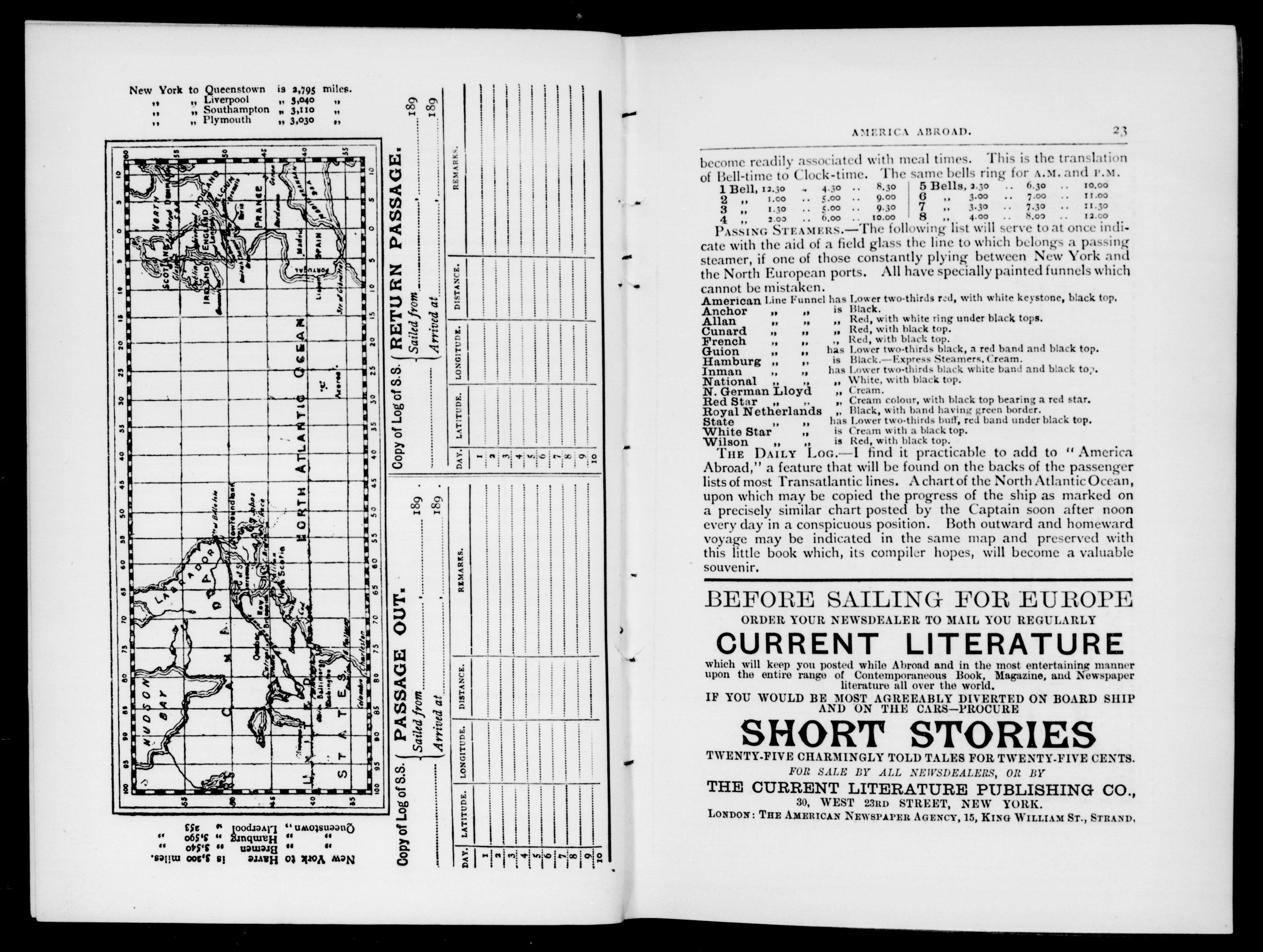 The era that America Abroad was conceived and successful was a time of rapid industrialisation and urbanisation, often referred to as the Second Industrial Revolution. The invention and subsequent development of the steamship was a watershed event in maritime transport and was the major driver of the first wave of trade globalization from 1870-1913.[1] America Abroad celebrated the continuous improvement of steamships, the first several pages of this booklet are filled with advice on the wonders of this method of transport. In a passage discussing the virtues of modern steamships, the author informs the reader that ‘there are no badly constructed or dangerous boats. In the present keen state of competition between companies they could not exist’. Furthermore, he enthusiastically advises that ‘You are more likely to be involved in a smash-up of your carriage in getting to the pier than not to get safely across the Atlantic’. Prior to the advent of steamships, crossings had to be taken on the perilous and laborious sailing ships. During the nineteenth century crossing the Atlantic Ocean became safer, faster, and more reliable. Market competition encouraged the building of luxury ocean liners on both sides of the Atlantic. In the excerpt below, the author discusses options for crossing the Atlantic, from travelling economically to ‘living like a prince’. America Abroad has an encouraging tone, optimistically predicting that the journey is something to be cherished, ‘there will be lots to interest him’. Even seasickness would not be a problem, ’if you are ill at all it will be over in twenty-four hours and the voyage become one of the most enjoyable experiences of your life’. This periodical celebrated the advancements in technology that allowed the crossing of the Atlantic to become ‘a joy’.

The industrial revolution also brought about an increased amount of leisure time. The Bank Holiday Act of 1871 introduced a statutory right for workers to take holidays.[2] This resulted in a travel boom across the Atlantic, and within Europe, as evidenced by the abundance of travel guides, news pamphlets, and transatlantic society periodicals that became popular in the latter half of the nineteenth century.[3] This helped facilitate the beginnings of mass tourism. Private travel shaped the global outlook of the hundreds of thousands of upper- and affluent middle-class Americans who crossed the Atlantic between 1890 and the outbreak of the First World War. For businessmen, tourists, wealthy women, cultural critics, policymakers, and other well-off Americans, travel to Europe became an increasingly common feature of their personal and professional lives.[4] 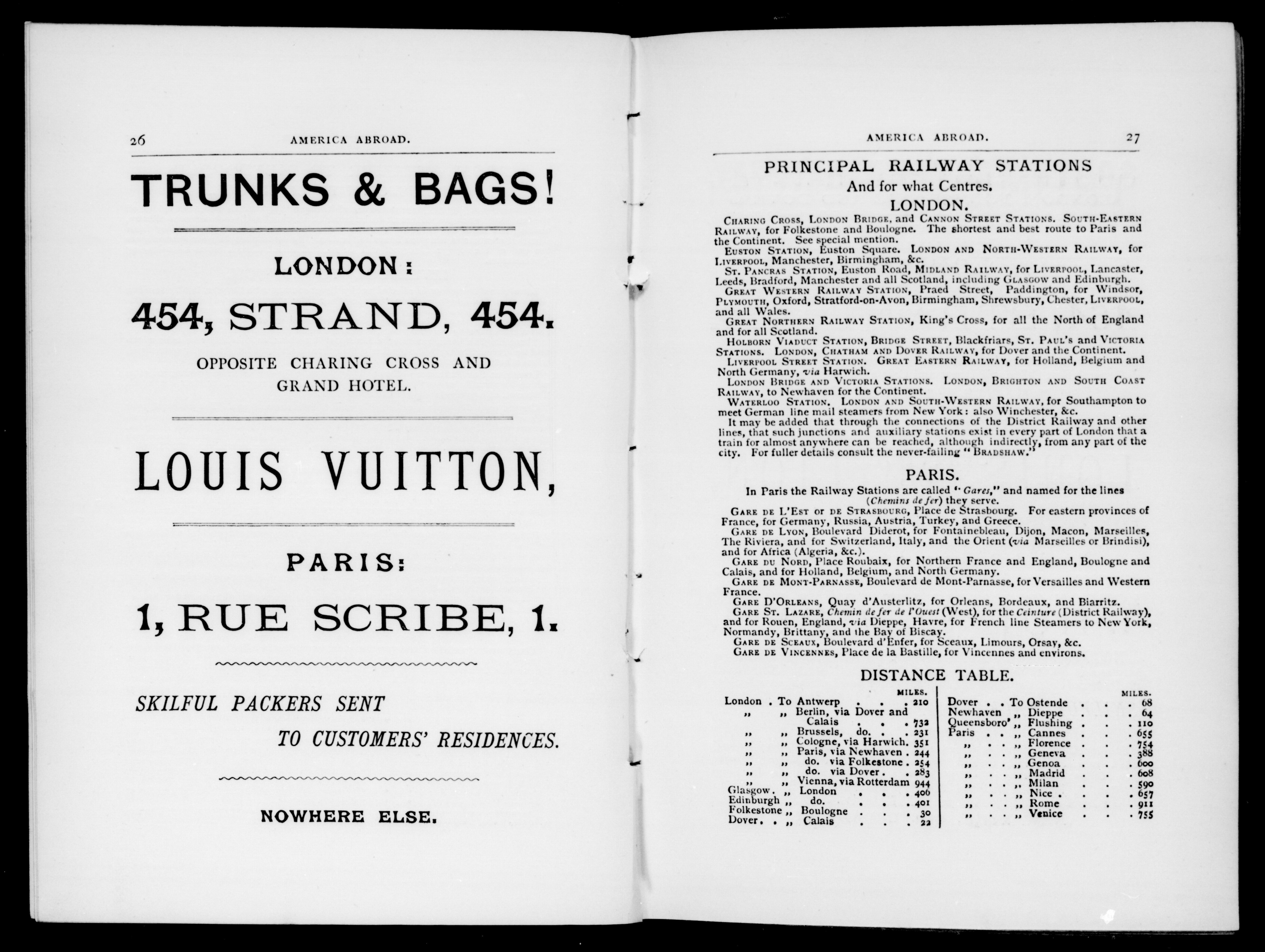 Improvements in internal infrastructure facilitated the rapid development of the travel Industry. Once travellers had traversed the Atlantic in their steamship, they could experience the wonders of Europe’s rapidly expanding railway network. This network made train travel easy and affordable to a wider range of the population than ever before. Within the periodical America Abroad, practical information was provided regarding this vital form of transport. One page displays the principle Railway stations for London and Paris, as well as detailing distance tables and fares. Furthermore, the periodical advises that trains in Europe ‘need not be hesitated about for a moment’. Recommendations are given to take a trip on the ‘European Railroads [as they] afford splendid cheap “circular” tours’. 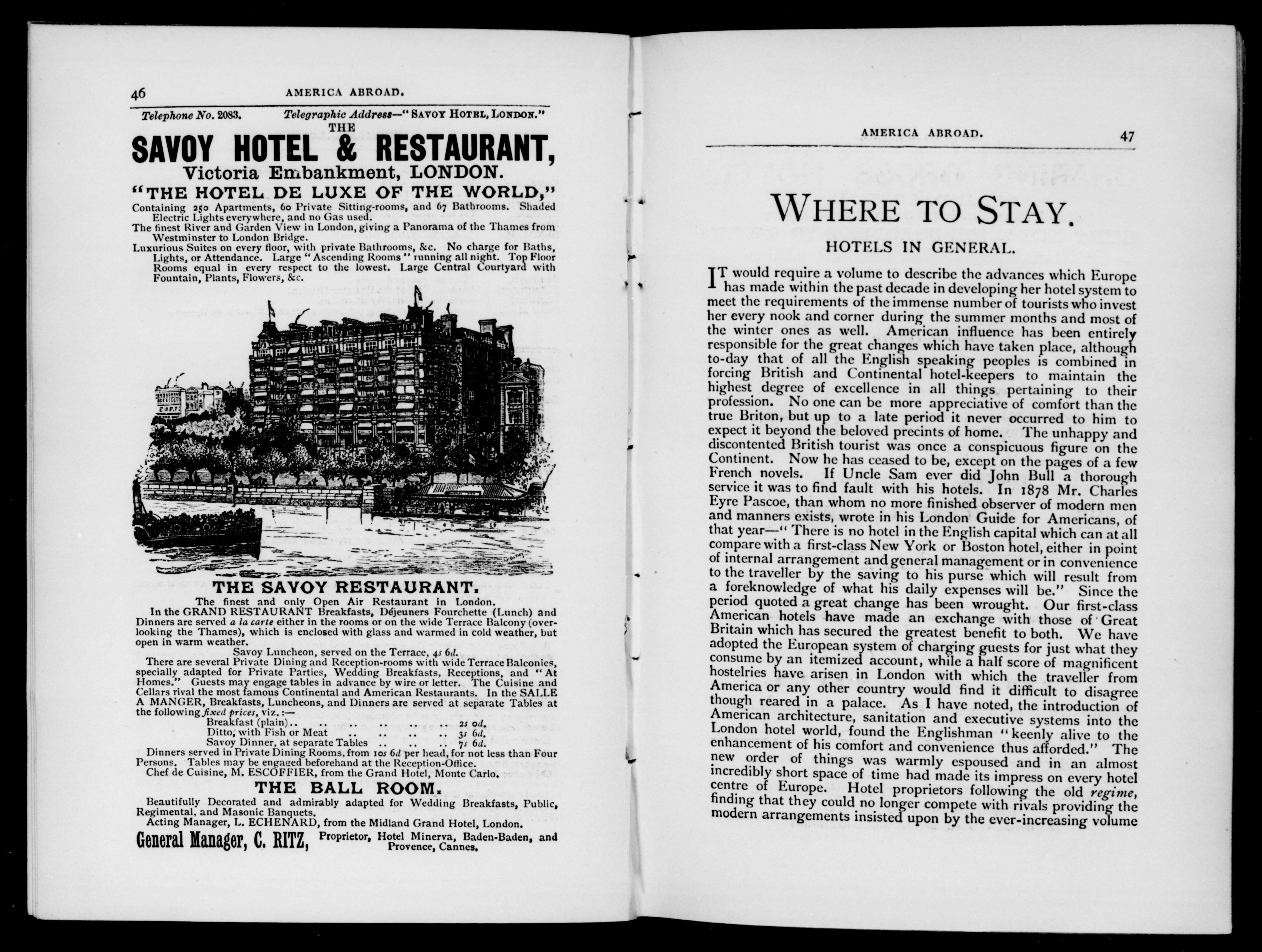 A note of superiority can be detected in the editor’s writings on American influence in Europe. The periodical suggests that ‘Paris stands next to London in its deference to American customs and requirements’. This implies a pride in American culture, especially noticeable when the periodical advises the American traveller where to stay in London and Paris. The author describes how, ‘in 1878 Mr Charles Eyre Pascoe, than whom no more finished observer of modern men and manners exists, wrote in his London Guide for American, of that year “There is no hotel in the English capital which can at all compare with a first-class New York or Boston hotel”’. The writer confidently rejoices that American influence on the continent has vastly improved lodging facilities, ‘It would require a volume to describe the advances which Europe had made within the past decade in developing her hotel system…American influence has been entirely responsible for the great changes that have taken place.’ The author assures readers that far from living in squalor, ‘no one can be more appreciative of comfort than the true Briton, but up to a late period it never occurred to him to expect it beyond the beloved precincts of home’. Due to the fact that British hotels are vastly improved the periodical is happy to advertise the Savoy Hotel on Victoria Embankment in London, which it describes ‘rightly worth of its claim to be the “Hotel de luxe” of the world’.

However, despite slight undertones of American superiority, the affection that the writer has for both the United Kingdom and Europe is clear. The author urges that the American should not ‘be afraid to ask questions. In spite of all tradition to the contrary, an Englishman is the most affable fellow traveller in the world, and will never fail to respond to an appeal for information, being quite as proud of an American’s interest in his country as vice versa.’ The pamphlet includes a large sightseeing section for London and Paris, this gives a researcher valuable insight into the commended attractions of the day. Most frequently recommended are galleries, monuments, churches, and parks, as well as prisons and hospitals. A special mention is given to English sport. The author recommends cricket matches for the ‘American baseball enthusiast who cannot see their favourite game’, and ‘will perhaps take an interest in the English national game which received about the same attention here as the “Diamond” field on our side of the pond’. 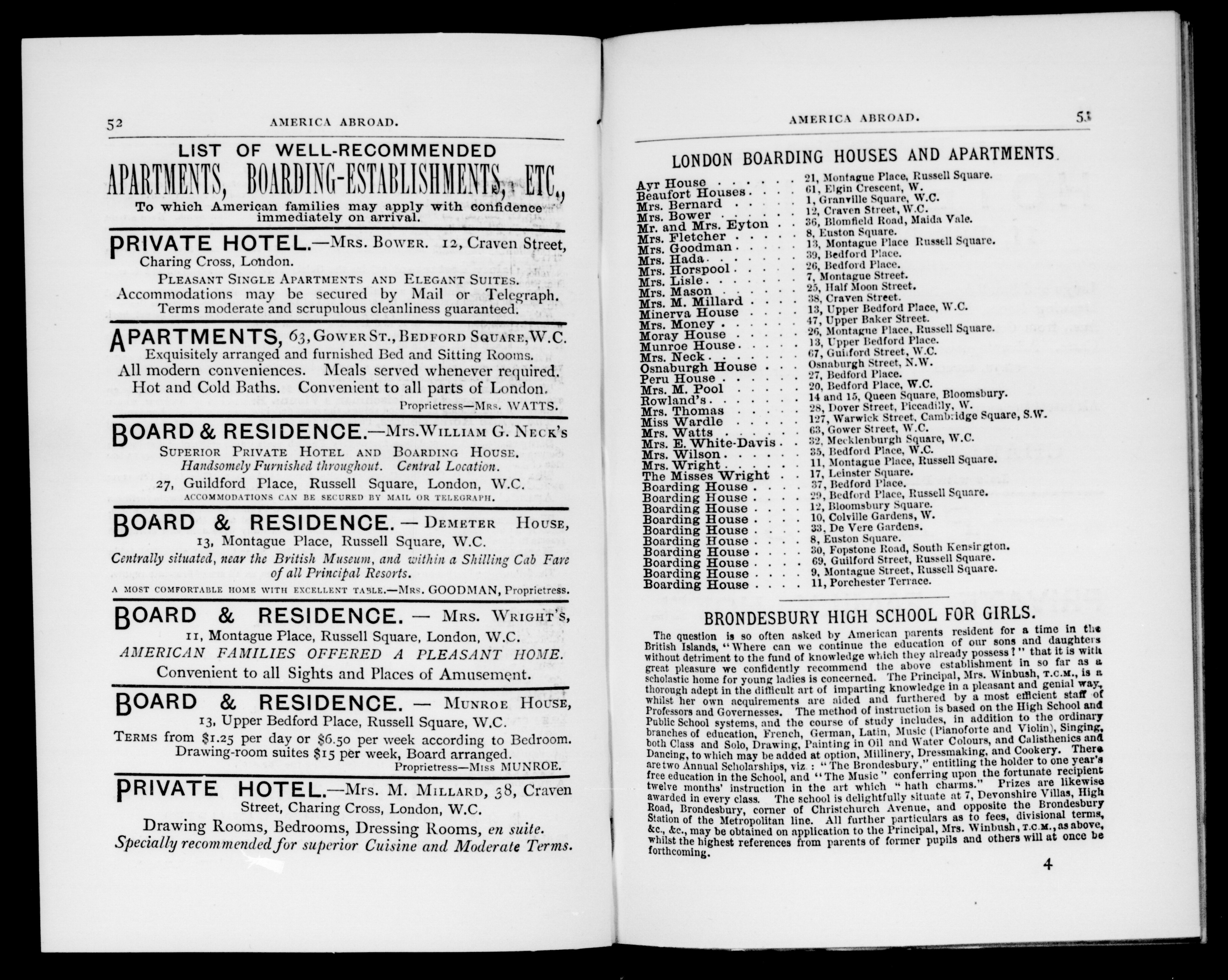 America Abroad is not solely aimed at tourists, but also at emigrants. Historians Hatton and Williamson argue that rising mass emigration was one of the most important features of the evolving global economy in the nineteenth century.[5] The vast majority of British and European emigrants settled in the United States of America, this led to a strengthening of ties. However, the importance and vibrancy of American emigrant communities in Europe should not be forgotten and is celebrated within this periodical. ‘Between them [London and Paris] in addition to the enormous floating population from the United States, is a divided resident American colony numbering several thousands, supporting influential newspaper, banks, commercial and educational institutions. They are, in short, the capitals of “America Abroad”.’ The periodical advises on where in London is best for long term boarding and how much rent should cost. To further help the emigrant community, the periodical includes a section detailing recommended high schools for American children. ‘The question is so often asked by American parents for a time in the British Islands “Where can we continue the education of our sons and daughters without detriment to the fund of knowledge which they already possess?” that it is with great pleasure we can confidently recommend…’Brondesbury High School for Girls. This periodical allows a researcher to study the importance of American communities within Europe. 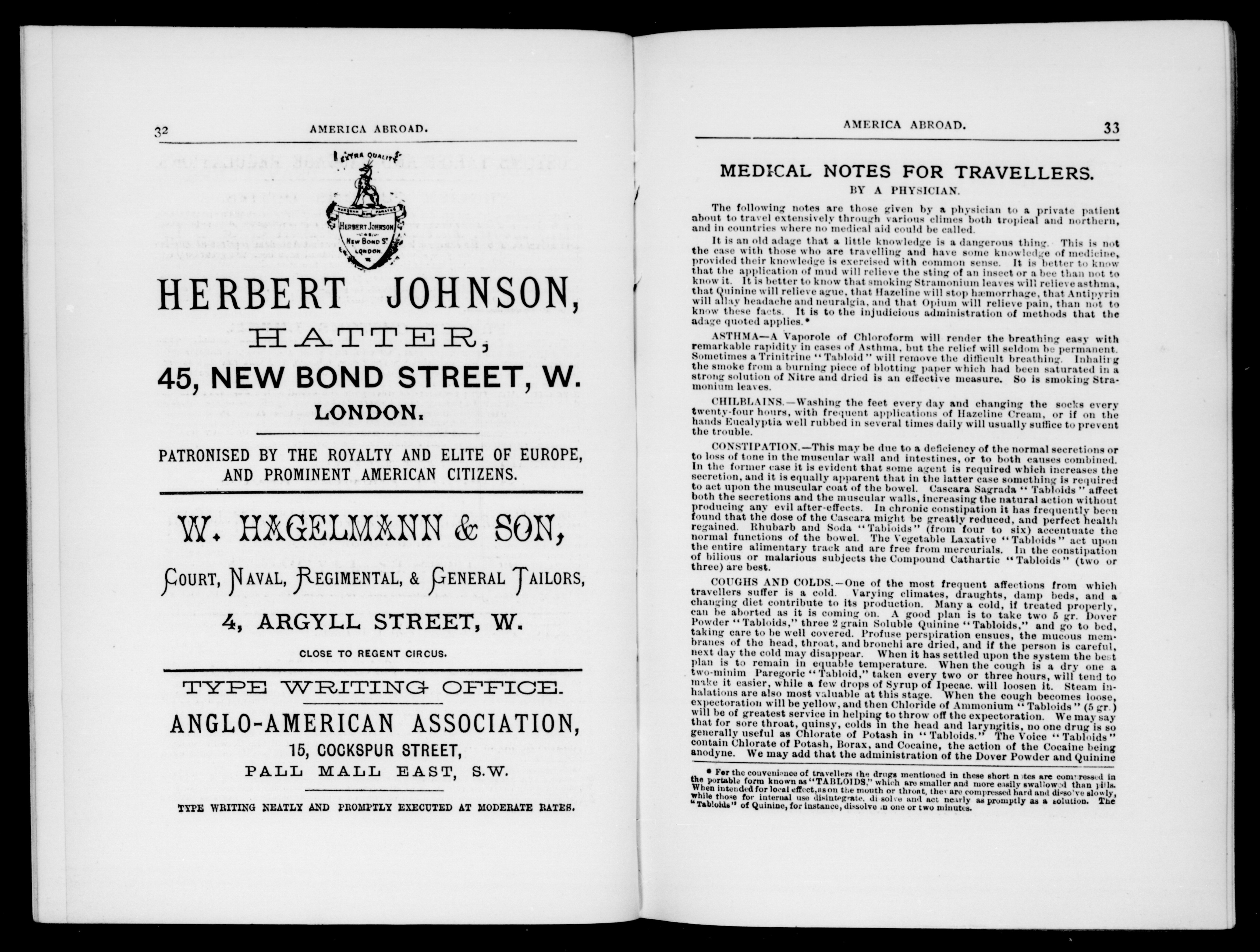 As well as providing a base to explore the effects of industrialisation on American and European civil societies, a highlight of this periodical is the section ‘Medical Notes for Travellers, by a Physician’. Scholars of medicine will be interested in the pages giving advice in the event that a traveller becomes ill whilst in Europe. These notes are extensive, giving advice on everything from poisoning (cured by digesting a teaspoon of mustard in a glass of warm water), to skin troubles (half a teaspoon of Cream of Tatar in a glass of water will act on the kidneys, and give the skin a better chance to cure itself). Regarding seasickness, ‘exercising on deck as much as possible is a great alleviator… Delicate people should nourish themselves on a standard beef extract “Bovril”. Four full pages of possible ailments and cures are printed, as ‘it is better to know that the application of mud will relieve the sting of an insect or a bee…smoking Stramonium leaves will relieve asthma…that opium will relieve pain, than not to know these facts’.

Ever since the Mayflower arrived in present-day Cape Cod carrying English Puritans in 1620, the histories and culture of the ‘New World’ of the United States and the ‘Old World’ of Europe have been intrinsically linked. The often-turbulent nature of North American and European relations encompass times of rebellion, war, peace, and estrangement. However, this periodical highlights that the advent of safer steamships, the development of tourist infrastructure, and a steady flow of immigration, resulted in further cultural convergence at the turn of the 20th century.  This collection is invaluable for researchers and students studying the evolution of North American and European civil society spanning three centuries.