The history of something as simple as an everyday match or a ‘work appropriate blouse’ can be imbued with historical horrors. In fact, as we re-examine our past, the history of industrialisation and the fight for workers’ rights, we find time and again that as one scourge was defeated, others lived on.

The strike of the Bryant and May factory workers in 1888 was historic in that it was led by working class women, many of whom were immigrants. Those three traits are a trifecta of historical discrimination, and sadly that carries on into the modern day. The industries may differ, but the results are consistent.

The producers of everyday objects lead lives that are rife with industrial health hazards.

‘Strike anywhere matches’ were a marvel of their time. They could be lit right on their box, and were marketed as safe, and less likely to start a house fire. Though they may have been safe for use, their production was anything but. 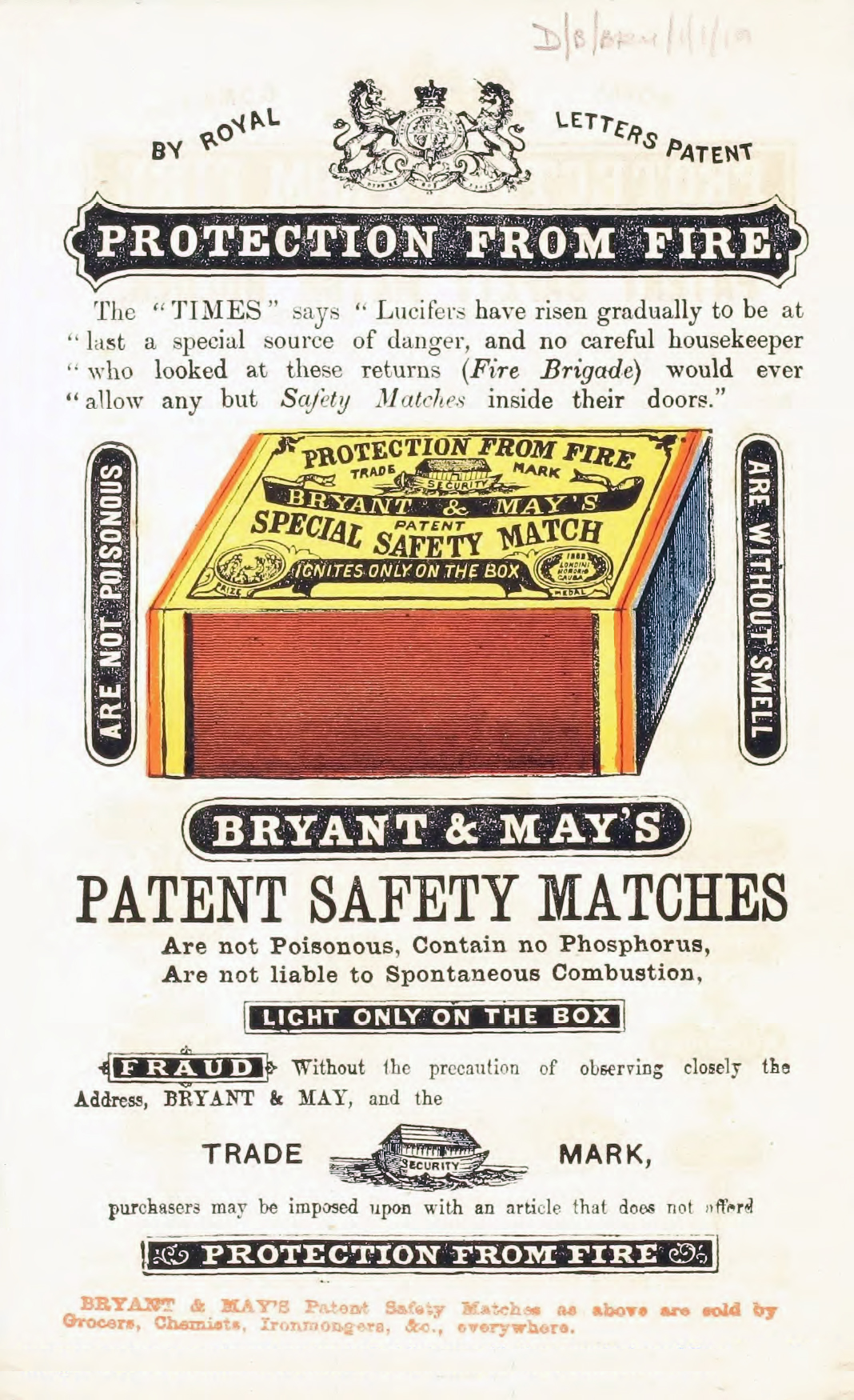 Imagine, if you will, an unlit historic factory floor that glows with an eerie phosphorescence every night. It would be shining either white or yellow, because one of the properties of one of the main ingredients in ‘strike anywhere’ matches of the victorian period was phosphorus (specifically those two colours). These matches were like the ones we still use today, where sandpaper or another rough surface was used to incite a flame. However, there were no automated machines to assist in the production process in the late 1800s, and so, workers were needed for every part of the process.

Now, imagine that you were working on this factory floor as a matchmaker, or perhaps a matchbox maker for many hours every day in a time before the common eight hour work day. This was the era before workers had any legal protection. You would not necessarily have had any escape from the smell of garlic that emanated from the match-making solution - phosphorus does have a strong garlic-y, or acrid smell. You would wear your work clothing home, and it too would glow in the dark. You would not have been wealthy by any means, and you may have even been suffering from scrofula (tuberculosis outside of the lungs, often in the lymph- nodes of the neck). When you started your job, all of your teeth were in decent condition. One day however, you have a toothache. This ache rapidly spreads, and you visit your doctor and have the tooth pulled. Sadly, this only allows the ache, really an infection in your bone, to spread faster, and soon you have wee bits of mandible exuding from your gums. Your teeth begin to fall out, and you rush to the doctor, only to find out that a portion of your jaw needs to be removed to save your life.

You have no reconstructive options, because that surgery doesn’t exist yet. You simply have to live out the rest of your life on soft foods, with no jaw to speak of. You are permanently disfigured, all because of some silly matches.

As disgusting and dramatic as that sounds, it was the reality for many people who worked in match factories in England. You see, white and yellow phosphorus are both poisonous. The particulates of the gasses resulting from the industrial processes of match making built up in the body of a worker and caused their jaws to literally rot out of their heads. Companies were aware of the issue as early as the 1840s, evidenced not just by publications, but by factory policy itself. Charles Dickens actually wrote about one factory’s requirement that employees cleanse themselves with alkaline water to neutralise the acidic phosphorus in 1848. In fact, match dippers in that same factory wore sponges in front of their mouths, potentially soaked in an alkaline solution, to mitigate the effects of phosphorus. Dickens claims that this, along with proper ventilation of the factory floor created a safer working environment for the employees.

Social activists and workers’ rights advocates campaigned for laws to protect matchmakers, but they were not the only people who noticed workers’ suffering. In 1888 the Bryant and May match factory workers went on strike. It would take twenty years before any concrete legislative results were seen from their strike. 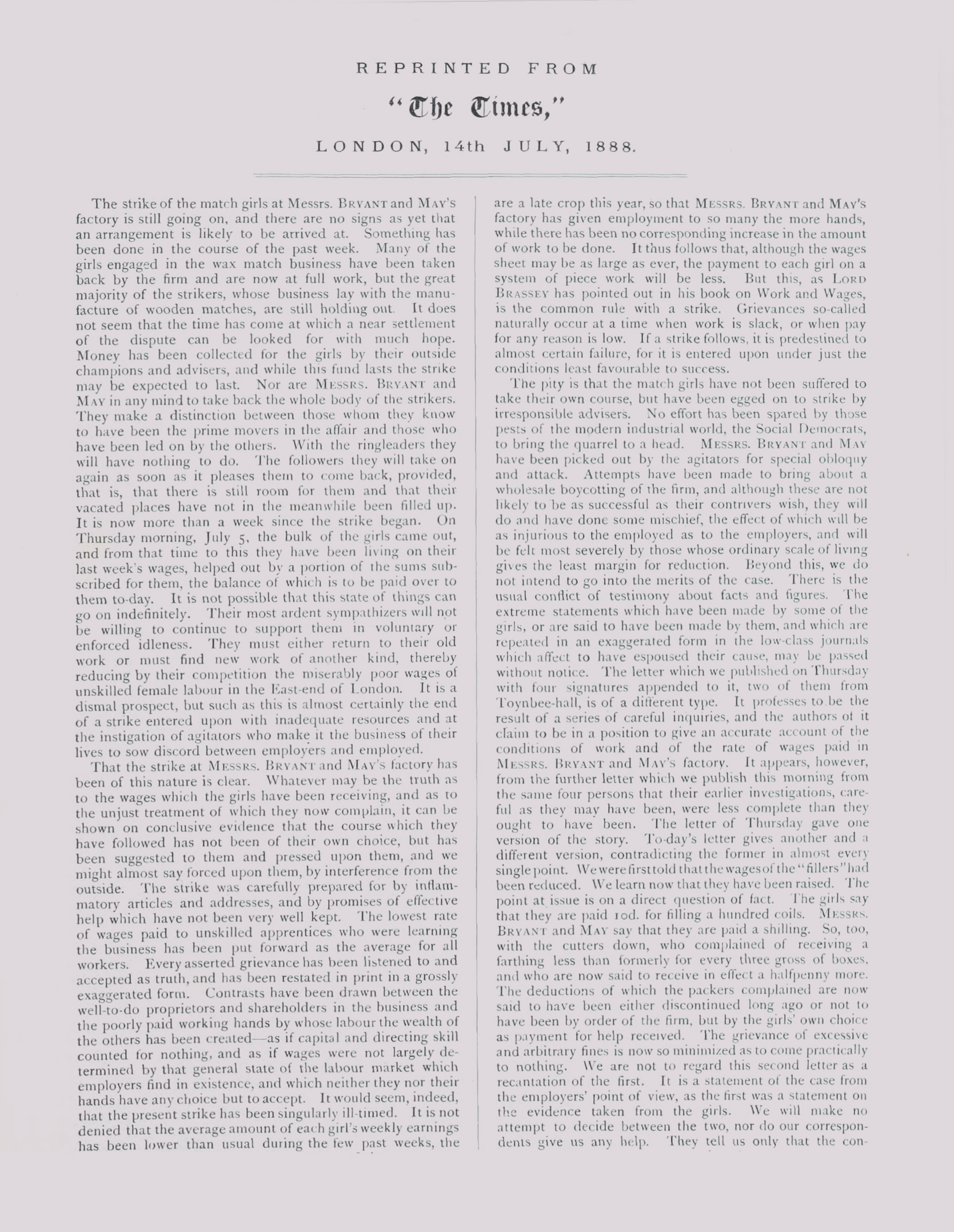 Though the strike had not immediately produced a ban on phosphorus match production, doctors were not blind to the issues that the workers faced. In 1899 Dr. Stockman published an article in the British Medical Journal that provided such a detailed description of the mechanisms of phossy jaw that it is still cited by scholars today. His description of the progress of phossy jaw mirrors the cases that Dickens presented in 1852. A young woman of scrofulous disposition (which we should take to mean sickly- pale, thin, wasting away), began to suffer from phossy jaw at the age of thirteen, just four years after she began working at a match factory in Manchester. Her case began with a toothache, though to her knowledge, all of her teeth had been in sound condition before. Dickens mentions that “Annie” as he has dubbed her, noticed that after returning home each night, she noticed that her skin and clothes glowed in the dark. And now, at twenty years old, she had been without a good portion of her lower jaw for seven years, as it had been removed to save her life. 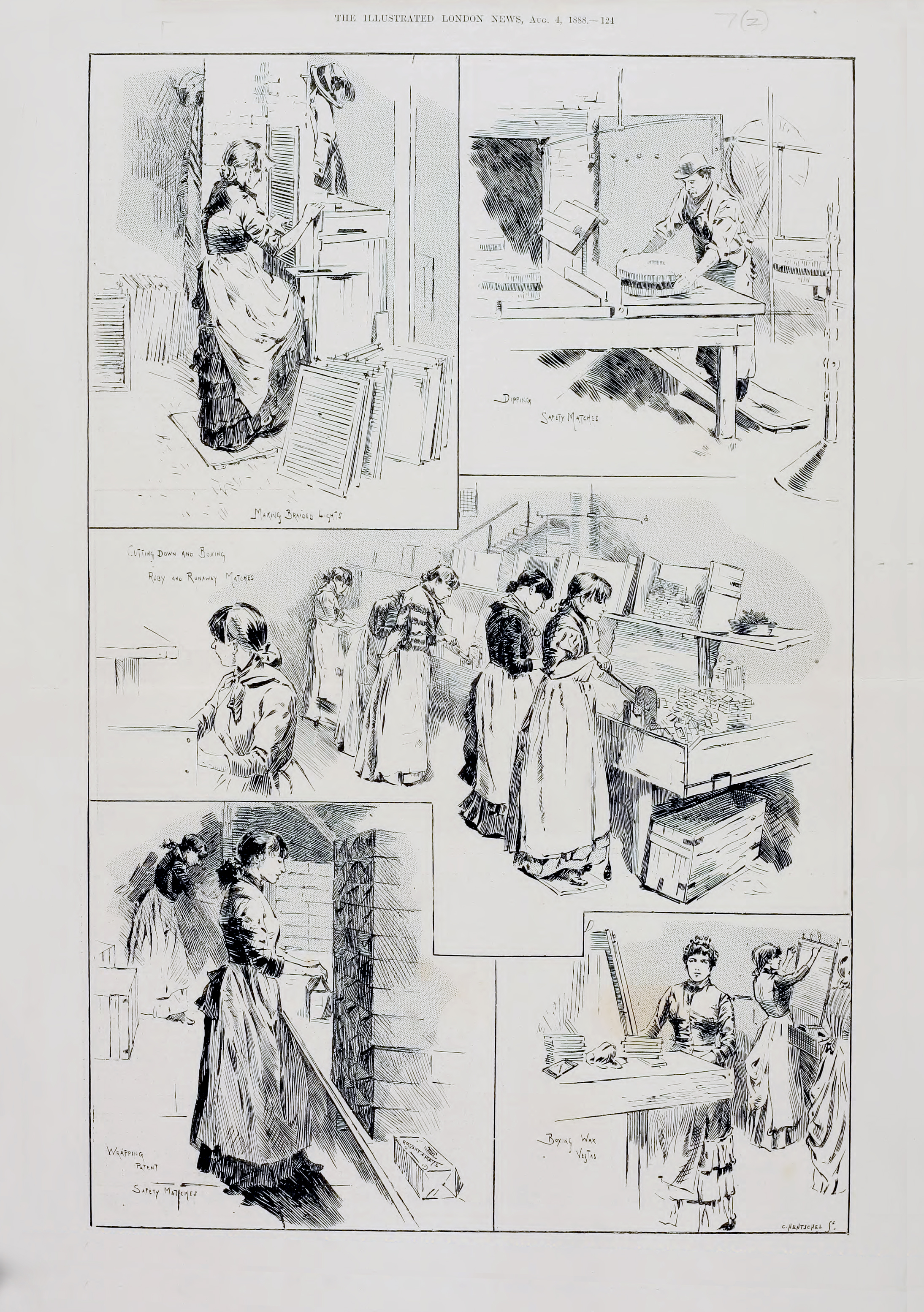 Dr. Stockman’s paper is rather more graphic than one should read on a full stomach, but his description of the actual bone is important, “The bare bone having a brownish or dirty-grey colour; its surface is roughened and eroded, evidently in a condition of caries”. For anyone who did not get osteological terminology hammered into their brains, a carious lesion is a cavity. Essentially, Stockman explains that it is as though a tooth cavity has spread, and discoloured the bone in a similar way. As with the aforementioned case of Annie, the condition can appear after years of work, but some cases present after a few months. Though Annie’s teeth were supposedly in good condition before her phossy toothache, Stockman determines that the infection always begins in a tooth cavity, or a socket where a tooth had recently been pulled. From a logical perspective, that makes sense, as both are a direct route to bone. Once an infection has spread to the bone, you have to either excise the dead tissue, or treat the infection and hope the bone heals, or you face a nasty death. In Annie’s case, the former choice was made, and she seems to have lived on.

It is no secret to anyone in the modern world that industrial chemicals can be hazardous to the health of workers. Bryant and May’s matchworkers were one of the first publicised cases of hazardous chemicals in factories, but they certainly weren’t the only workers who were poisoned by their jobs. At around the same time, vulcanised rubber factory workers were coming down with cases of insanity, vision loss, bouts of unconsciousness, and more. In the mid-1800s, silly as it sounds, many of the workers plagued with this industrial poisoning worked at condom factories! The culprit in their case was a chemical called carbon disulphide, which was used in the production of vulcanised rubber. Like phosphorus necrosis, onset of carbon disulphide poisoning symptoms was variable. And just like in match factories, ventilation was considered the key to avoiding such poisoning.

One would think that vulcanised rubber was bad enough, but what if I told you that some of your modern clothing was created using the same poison? That’s right! Viscose, also known as rayon, is an artificial silk made from plants. Much better than plastics, right? Well sure, if you don’t mind some carbon disulphide!  It made some pretty swanky clothing beginning around the 20s, and it still does. In fact, you can easily pop over to Primark and pick up some sweet artificial silk!  Whereas the Bryant and May matchworkers were able to get white and yellow phosphorus banned in match production in 1908, production of viscose still uses carbon disulphide today.  The factories that produce viscose have mostly been outsourced to South and East Asia, where most consumers of fast fashion won’t see the effects on the workers’ health. Before moving out of the US, Blanc reports that a main viscose production site in Alabama had multiple suits filed against it, both for environmental damage, and workers’ health hazards.

For all non-Americans, Alabama is notoriously poverty stricken. The location of a viscose production plant in a working class area, that caused injury to its workers, and faced no real legal consequences sounds like something out of the Victorian era. Yet this was an ongoing issue through the early 2000s. As much as our problems change, they certainly also stay the same.

Stockman’s phossy jaw paper discusses that the cause of death for people suffering from phossy jaw usually wasn’t the phosphorus itself, but rather a respiratory infection (there were some rather disgusting experiments involving pus collection from sufferers). Such an infection could have been there since before the jaw was affected, especially considering the poverty of factory workers and their living situations. This has real relevance today with the fast fashion industry, and the treatment and safety of garment makers within it. The low pay, lack of safety regulations, and use of actively harmful substances in the production of Lucifer matches caused the workers to strike. I think I would have done the same in their shoes.

With the exception of yours truly in a red rayon dress, all of the images shown in this article are from the British Online Archives. There is a whole collection of digitised documents about the Bryant and May match worker strike, including the court proceedings that led to the monumental ban on white phosphorus. 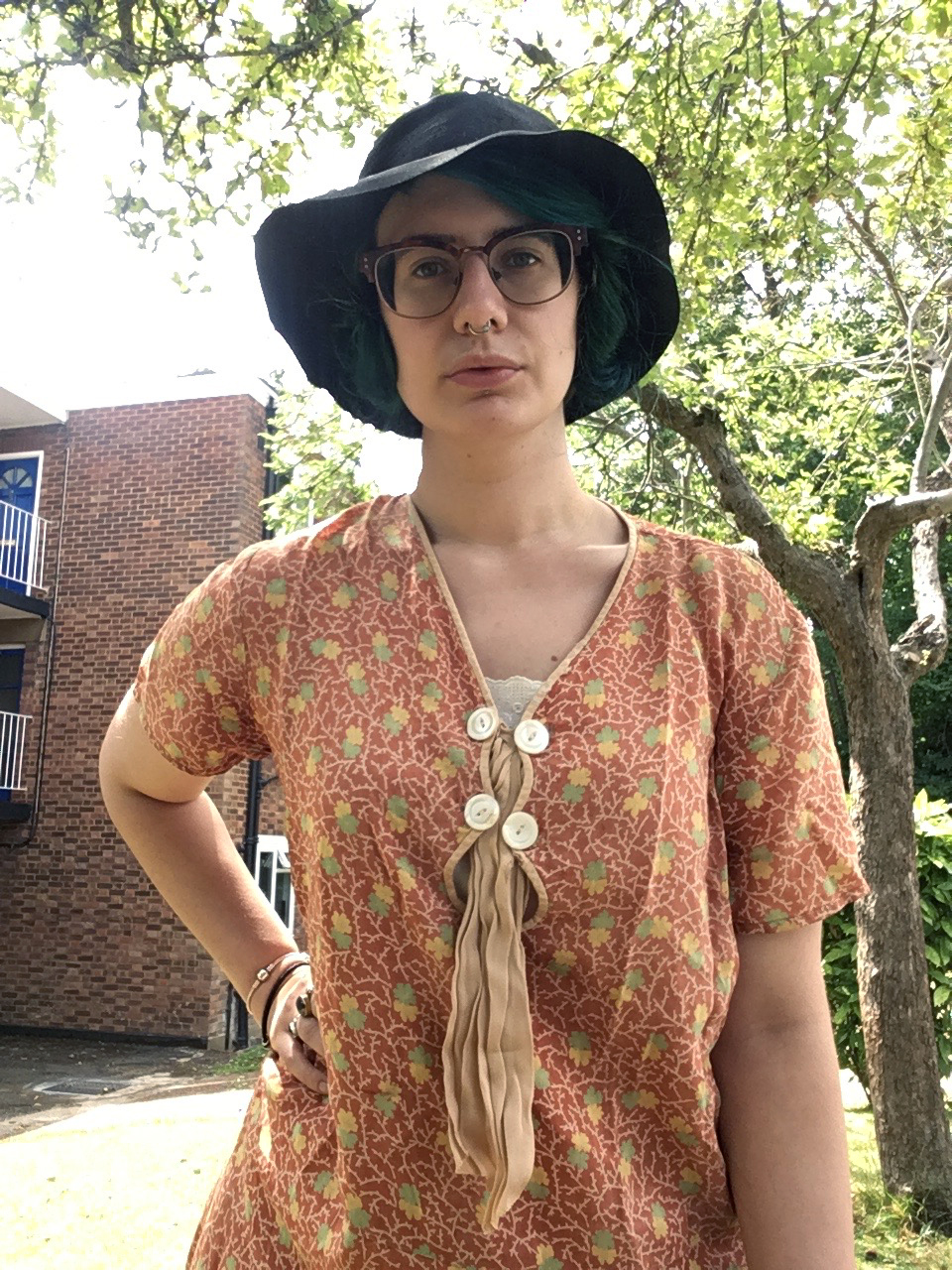 Hanna Polasky got her undergraduate degree in anthropology from Bryn Mawr College, and her MSc in Paleopathology from Durham University. If it has to do with the history of fashion, medicine, or archaeology, she's definitely interested.