Representations of slavery did important work in the argument for abolition. However, Black abolitionist writing was rarely left untouched by contemporary editors. Nowhere is this more evident than in Mary Prince’s autobiography, a shocking first person account of the horrors of slavery experienced by Prince, as she was bought and sold between slave-'owners'. Published in 1831, The History of Mary Prince was the first published account of the life of a black woman in the United Kingdom. This account was important in the campaign to abolish the slave system. Although this narrative is described as an autobiography, Prince herself was not literate, she relied heavily on her editors Thomas Pringle and Susannah Strickland. Historians hotly debate how much of the narrative is Prince’s authentic experience and how much has been edited to appeal to a specific abolitionist audience. It could be argued that the text reveals as much about contemporary Britain, as slavery in the West Indies. It is important to explore the complexity of authorship in the formation of this instrumental text.

Mary Prince was born to an enslaved family of African descent in Bermuda, 1788. By the time Prince reached the age of 27, she had been sold on four separate occasions, the last to John Adams Wood, an Antiguan landowner. In 1828 John Adams Wood and his family travelled to London, bringing Prince with them. Whilst travelling in England Prince came into conflict with John Adams Wood and left his service. Although it had been made illegal to transport slaves out of England, through a loophole in the law, slavery itself was not illegal.  Therefore, Prince was technically free in England, but she could not return to her husband and home in Antigua without being re-enslaved unless John Adams Wood emancipated her. Adams Wood refused to grant her freedom or to sell her to another who would grant her freedom. Prince's plight was taken up by the secretary of the Anti-Slavery Society and abolitionist writer Thomas Pringle. Pringle employed Prince as a domestic worker and encouraged her to allow aspiring author Susannah Strickland to transcribe a narrative of her life. Little is known about Prince after the publication of her autobiography, however, she did remain in England until at least 1833 when she testified in two libel cases. 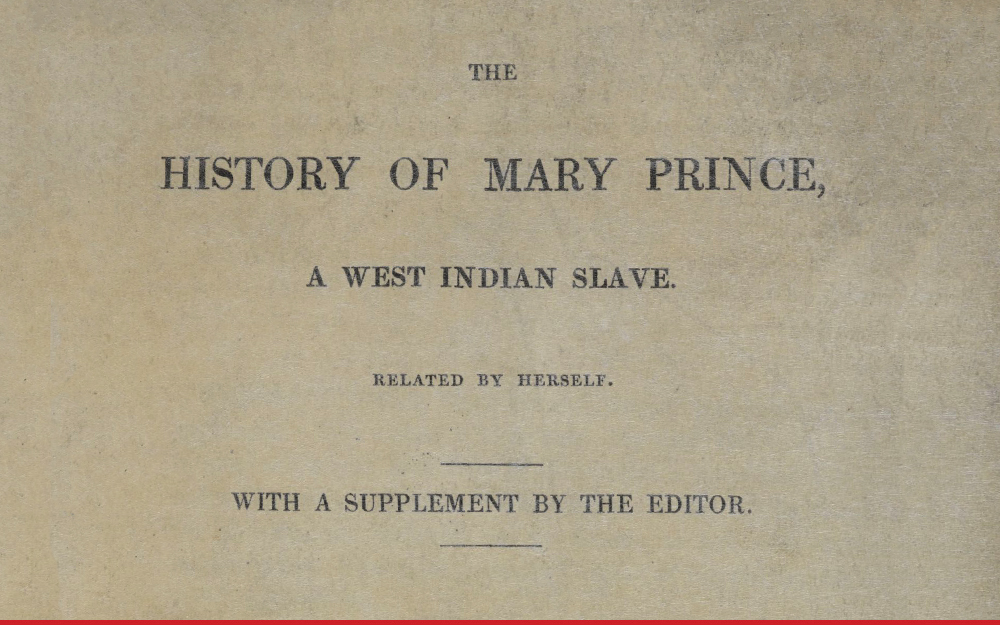 Black writings were often explicitly abridged to further the respective political agendas of the abolitionist editing the narratives, who specifically shaped them into works of propaganda. Prince’s autobiography follows a precedent of amended histories, seen through the removal of personhood and a heavily abridged narrative. Its specific marketing towards an audience of white female philanthropists, who had otherwise been side-lined in the British abolitionist movement, pervades every editorial decision made by Pringle and Strickland. Consequently, Prince’s autobiography is abridged and edited according to Western gendered ideals so as to market Prince simultaneously as morally upright and yet still inferior to the intended audience. Three methods were utilised by Pringle and Strickland in order to achieve this, the first being the depiction of the white women involved in the narrative as entirely innocent and thus absolving any feminine influences of guilt. Secondly, to further appeal to this demographic, Prince’s narrative details explicit sexual violence to act as an affront to a Western audience, with the omission of any consensual sexual acts exposing Pringle’s awareness of the importance of respectability within female realms of philanthropy. Finally, the distortion of black voices in which they are frequently silenced in order to reassert the superiority of the abolitionist audience. Ultimately, these methods of editing Prince’s autobiography reveal that Prince's narrative was shaped into a piece of propaganda, with the intention of appealing to a selected audience, and are thus edited through altering and omitting any elements that do not serve an outsider, white agenda.

It becomes evident, when considering the intended target audience, that Prince’s work has been altered to appeal to white, female sensibilities, most clearly seen in the presentation of white women in The History. In his book, Beyond Slavery and Abolition: Black British Writing, c.1770-1830, Ryan Hanley illustrates the unavoidable influence the intended audience had on Prince’s work, in which Pringle reinforced women’s support for abolition by appealing to a gendered form of moral outrage.  Prince’s relationships with women must be presented as harmonious so as to achieve the sympathy of the audience and their much-needed support and influence in the abolitionist movement. Inherent to the success of this appeal then is the pandering towards a white female audience, illustrated in Prince’s presentation of the women in her autobiography. Prince recounts her relationship with her first mistress Mrs Williams warmly, describing her as a ‘kind-hearted good woman’ and that she ‘loved her very much’. Immediately white women are absolved from guilt and have a medium through which they can relate their philanthropic instincts. It is worth noting that the singular female figure who incites violence was not named, instead merely called ‘Mrs I-’ or ‘mistress’. So as not to alienate the female abolitionist audience further, Prince’s harsh mistress consistently juxtaposes all traits associated with the feminine. Instead, she is described as ‘savage’ and her actions constantly undermine preconceived notions of femininity, seen most explicitly through her lack of maternal instincts. This is illustrated through Prince’s graphic recount of her ‘fellow slave’ Hetty being whipped during pregnancy to such an extreme that both her and her child were killed. Such a shocking contrast to the concept of femininity ensured that the white female audience did not see a reflection of themselves implicit in the horrors of slavery, and rather saw the institution as a monstrous violation of all things feminine and just. This specific and careful presentation of white women in Prince’s narrative is clear in implicating Pringle’s influence over her narrative. Through absolving the feminine figures in Prince’s autobiography of guilt, Pringle and Strickland can appeal to their chosen audience, and this shaping is vital to the works’ marketability as a piece of abolitionist propaganda. The exclusive depiction of feminine figures as benevolent ensures the safety of the white abolitionist ego and reinforces the notion of status inherent to philanthropy.

Western morals surrounding sex constitutes a second principle Pringle and Strickland carefully edit The History according to. Hanley argues that the intense and graphic imagery included in Prince’s autobiography surrounding sexual violence ‘were at once too shocking for ladies to read and too shocking for them to ignore’.  This distinction is key in explaining the deliberate choice to include some overtly sexual content. The lack of consent is vital in maintaining Prince’s respectability and subsequently the respectability of any abolitionists found supporting her. A court case against Prince, filed against her by her former enslaver MacQueen, reveals just how deliberate the omission of certain elements of Prince’s sexuality in the text was. After intense cross examination it was revealed that Prince was sexually promiscuous, and she was accused of prostitution by the prosecution. This part of Prince’s narrative had been purposefully omitted from her autobiography by Strickland. Prince herself was aware of the editing of her narrative, she revealed that Strickland did not write down everything she narrated. It becomes clear that for Strickland and Pringle their prevailing influence is the intended audience, with the two accommodating for a Western disdain for sexual liberty over Prince’s candour. Prince had openly shared details of her previous sexual relations with her editors, this suggests a desire to document this part of her life. Pringle and Strickland’s hopes of engaging a female abolitionist audience whose own influence depended on assurances of virtue and respectability would be destroyed by these inclusions. This shows just how invasive the shaping of Prince's narrative really was. The drastic impact that these revelations would have had illustrates the vital role that Western conceptions of gender played in Prince’s writing and, as such, their inescapable influence throughout her autobiography. Public support for The History almost entirely depended on Prince’s character being pruned and shaped to an exact measure and the result of this facade crumbling would be catastrophic.

A third method used to shape Prince’s autobiography into a profitable piece of abolitionist writing is the omission of Prince’s voice by Pringle and Strickland in key areas of the text. Examples of such editing are abundant in Prince’s autobiography, her visceral reaction to Hetty’s death is particularly notable. Continuous references to ‘fear and sorrow’ are detailed by Prince who was intensely scarred after watching the brutal murder of her friend. This horror amounted to such an extent that Prince found herself wishing for death also in order to save herself from going ‘from one cruel master to a worse’. This desperate hope for freedom that Prince felt could only be achieved through death so she could ‘be at rest in the grave’, clearly indicates an intense emotional response to the evils of slavery, so damming she had no solution other than suicide. Alongside this deeply personal experience, however, comes the invasive voice of her editors, which juxtaposes and undermines Prince’s plea for death. Firstly, an alien appeal to western religiosity sits uncomfortably alongside Prince’s words in which it is even admitted Prince ‘knew not’ the God Pringle and Strickland strategically heralded as a merciful force. Pringle and Strickland’s inclusion that the ‘hand of God … stretched over’ Prince was vital in appealing to the morally strict and fundamentally religious audience. Once again the prioritisation of marketability infringed upon Prince’s authentic experience. An abrupt segue at the end of this section exposes this pervasive editorial voice further, once again alluding to the political agendas of Strickland and Pringle. After such an intense display of emotion, the inclusion of the line ‘But I must go on with the thread of my story’ is indicative of an editorial voice keeping Prince’s account short and, ultimately, profitable. This invasive editing is present across black abolitionist writings, historians C.T Davis and H.L Gates Jr. discuss further examples in Frederick Douglass’ writings in their book The Slave’s Narrative. The two discuss the very real impact of the interventions made by abolitionist editors and the ultimate result in which the emotions conveyed are diminished. This is seen in Douglass’ case when ‘Washington rends Douglass's rhetorical antitheses asunder with the apologetics of the parenthetical’. Through trivialising Douglass’ distress about his unknown birthplace or time, Washington reduces the vitality of Douglass’ autobiography, as do Pringle and Strickland with their own edits on Prince’s work.

In conclusion, it is evident that Prince’s book was edited with little concern for subtlety or respect of her authentic experiences. Rather, the primary concern is that of furthering a political agenda and producing a marketable piece of propaganda. An analysis of the edits of her work reveal that it was twisted in order to appeal to a white female audience whose own conceptions of gender were treated with as much significance as Prince’s real experiences of slavery. Prince shows herself to be aware of the editing of her narrative when she revealed that Strickland did not write down everything she narrated.  Marketability rather than authenticity was the primary focus for shaping Prince’s autobiography and this was achieved through the prioritisation of a white audience, a moral appeal to sexual purity, and the silencing of Prince’s voice whenever it came into contest with this agenda. It could be argued the text reveals as much about contemporary Britain, as it does about slavery in the West Indies.

Prince, M, & Ferguson, M. (1997). The history of Mary Prince: A West Indian slave. related by herself. University of Michigan Press.

Niamh Franklin studies History at the University of Bristol.