From the Archive: Prosecuting the Holocaust

From the Archive: Prosecuting the Holocaust

Our recently published primary source collection, ‘Prosecuting the Holocaust: British investigations into Nazi Crimes, 1944-1949’, provides a valuable and unique study into the British governments efforts to investigate and prosecute Nazi crimes after the Second World War.

The featured evidence shines a new light on almost every aspect of the Holocaust, from receipts for the purchase of Zyklon B and doctor’s reports on medical experiments to pleas for clemency from desperate family members of suspected Nazi criminals. Studying these records allows researchers to reflect on the impact of the Holocaust and the Nazi war crime trials. And, perhaps more importantly, they give a voice to the victims and survivors through detailed and often emotive witness testimony.

Each image has been filtered through up-to-date optical character recognition technology to ensure an effective search function. This means that it is relatively easy to follow an individual's journey through the concentration camp system and post-war court proceedings. Such a tool allows for in-depth comparison of the lives of those who inflicted, survived, and died at the hands of Nazi brutality.

It is through their stories, after all, that the true horror of national socialism and fascism is revealed.

Nikolaus Wachsmann agrees. In his book, KL: A History of the Nazi Concentration Camps, Wachsmann urges his fellow historians not to "fall silent [as] much of the history of the camps would soon be left in the hands of cranks, dilettantes and deniers." Wachsmann further suggests that "the most effective way of writing a comprehensive account of the [Holocaust]...is a history which combines a macro analysis of Nazi terror with micro studies of individual actions."

The materials in this collection permit historians to do just that. Indeed, being able to put individual experiences in the context of wider political structures, and vice versa, has been perhaps the most rewarding, if not disheartening, experience as an editor.

One testimony in particular that has stayed with me is a clemency plea from Maria Schreier. Maria was born in Romania and moved to Germany with her 18-year-old son, Heinrich Schreier, in June 1941. They lived in different transit camps together until Heinrich was called up for service. He claims to have served in the Luftwaffe but was accused of being in the SS at Auschwitz-Birkenau, which he strenuously denied throughout his court testimony. 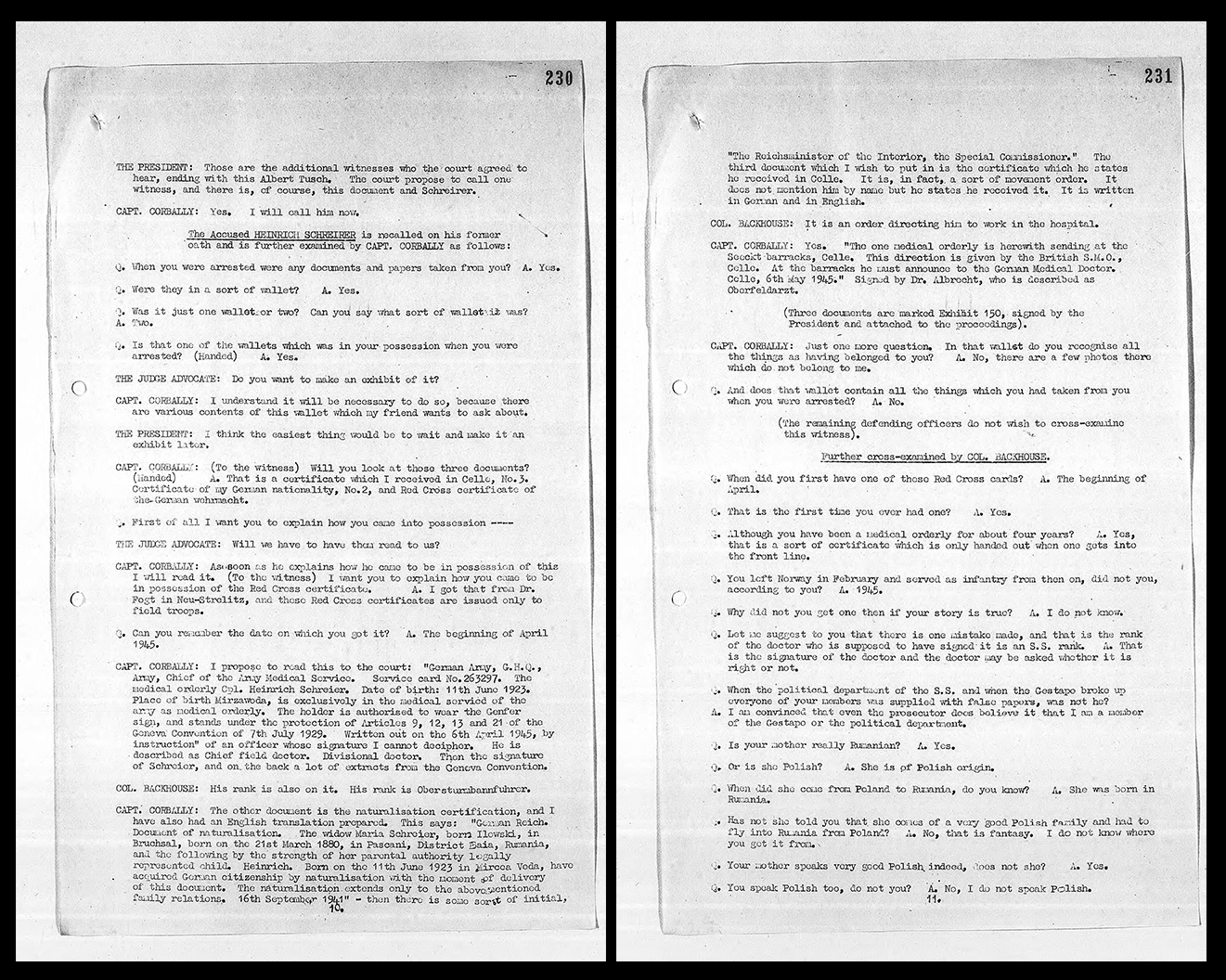 Witness testimony against Heinrich was descriptive and harrowing. Concentration camps were often "sites of lawless terror". Abuse in every form was rife and this is reflected page after page, person after person.

The below testimony is from the deposition of Alexander Kurowicki, who was arrested by the Gestapo in January 1941 on political grounds. 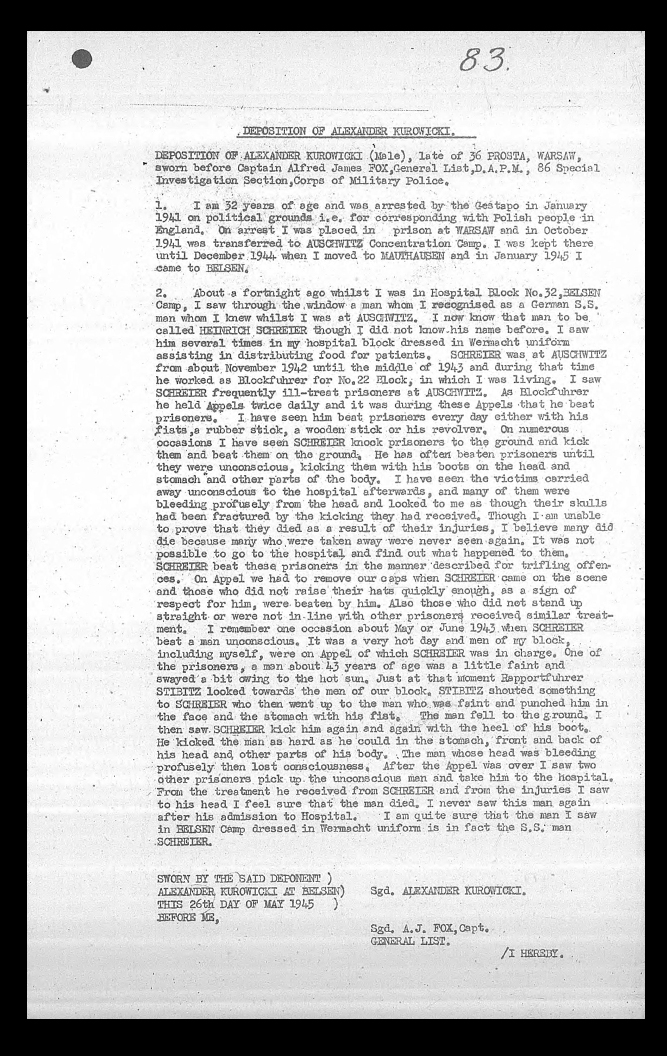 As a result of this and other evidence, Heinrich Schreier was sentenced to 15 years imprisonment in November 1945. 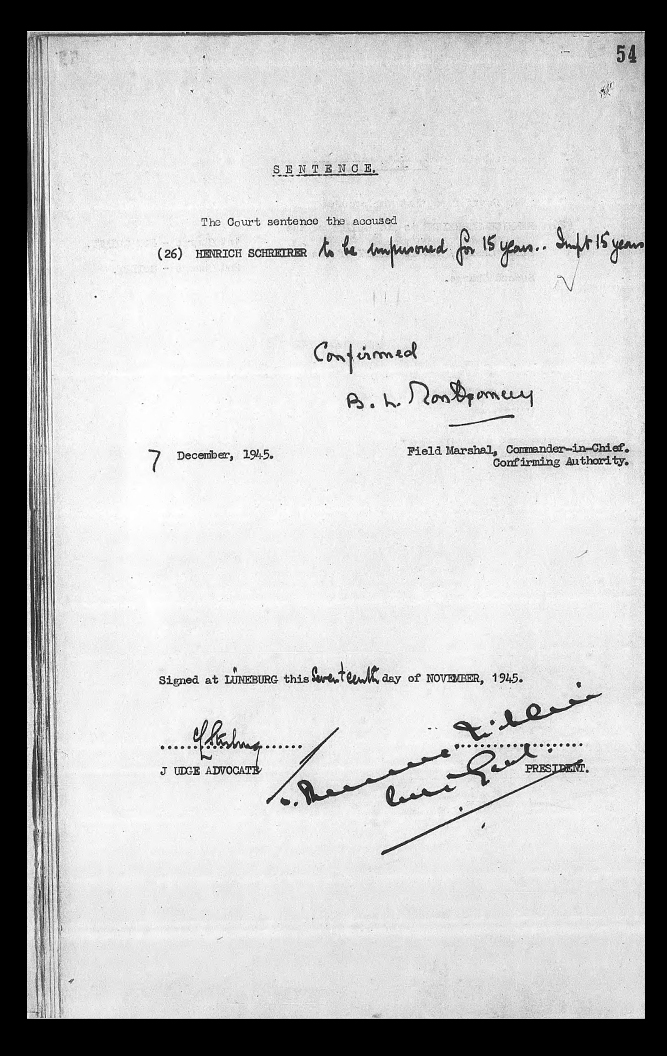 Many friends and family of alleged war criminals made emotive appeals for clemency. Maria Schreier submitted a clemency plea in which she argued that ‘the judgement was passed in the first period of revenge and I am sure that today this case would be treated different[ly]’. Interestingly, as Maria Schreier asserts, in the first years after the war many war criminals were convicted as the victors pursued the goal of 'denazification'. Denazification was an Allied policy pursued from 1945 to 1948 with the aim of purging all elements of national socialism from public life and to bring its leaders to justice. However, when Maria wrote this plea in 1949, public opinion had begun to shift. The policy had been deemed ineffective to such an extent that by 1951 the first Chancellor of the Federal Republic of Germany, Konrad Adenauer, passed several amnesty laws. Not only were officials allowed to retake jobs in the civil service that they had held during the Third Reich, but also just under one million people sentenced for war crimes were pardoned. In Exorcising Hitler: The Occupation and Denazification of Germany, Frederick Taylor observes that Adenauer's government imbibed "the sleep cure."

Indeed, although Germany paid billions of Deutschmarks in compensation to Jews, few Nazis were prosecuted. Maria, along with many others whose family members had been convicted, would have felt that now "the first period of revenge" had passed they were more likely to secure clemency for their relatives. 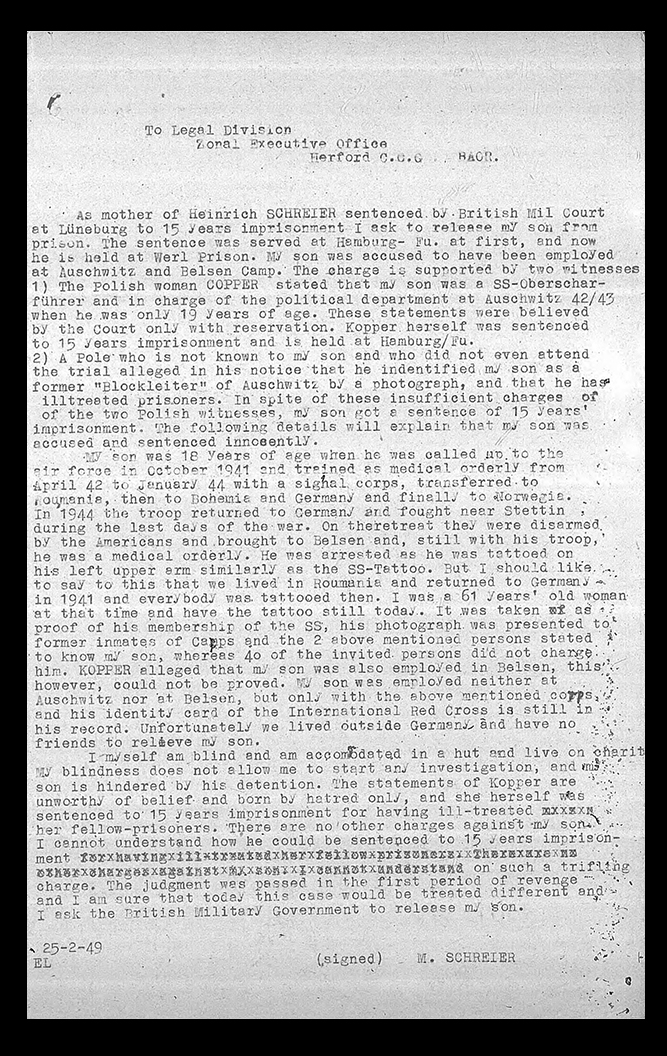 With the prevailing mood in Germany shifting towards clemency, Schreier’s sentence of 15 years imprisonment was suspended. He was discharged alongside thousands of others in September 1951. 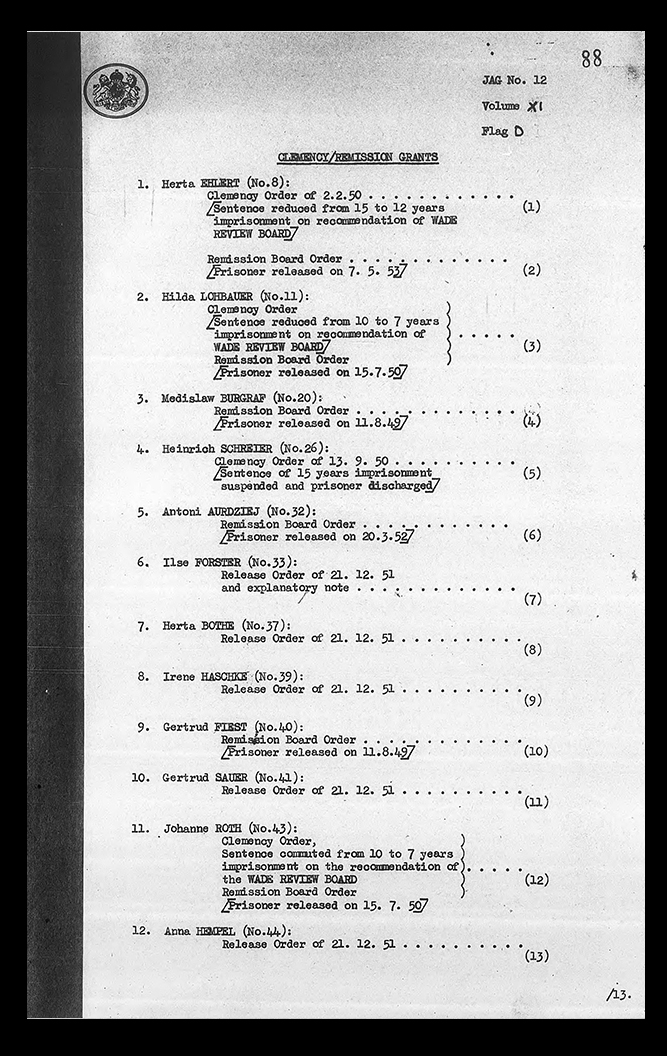 But the debate is not over.

What impact did denazification have on post-war Germany, both East and West? Should Nazis such as Henreich Schreier, conscripts at the age of 18, be prosecuted? To what extent can individuals be held responsible for their actions in a time of war?

Historians and lawyers are still grappling with these questions today. A 2011 landmark ruling against John Demjanjuk, aka Ivan the Terrible, a Ukrainian prisoner who became a ‘foreign helper’ to the Nazis after his capture in 1942, found that someone could be sentenced for being "a cog in the Nazi killing machine." This ruling paved the way for more prosecutions. Just last year, Bruno May, a former guard at Stutthof concentration camp, went on trial in Hamburg accused of having been an accessory to the murder of 5,230 people.

Using the evidence in this collection allows students and researchers to gain a human perspective on the brutality of life under fascism. The crimes committed by the Nazis were undoubtedly heinous. This documentation has the potential to be an important safeguard against future evil.

As one report makes clear, we must remember that while “the background and behaviour of SS staff varied greatly...the perpetrators were human beings.” It is all too easy to paint perpetrators as sadists, psychopaths, demons even. But, as this archive demonstrates, the more terrifying reality is that most of those who were complicit in Nazi crimes were, for lack of a better phrase, normal people living in abnormal times.

Author and Holocaust survivor Fred Katz argued in his book Ordinary People and Extraordinary Evil that “ordinary caring people do take part in extraordinary evil….given sufficiently appealing circumstances.” There is no reason to believe that those circumstances will not arise again—indeed, they have done, over and over, in every corner of the globe.

It is imperative, therefore, to always be on guard, not only by foregrounding the “banality of evil”, as Hannah Arendt would have it, but also by recounting the basic human decency and hope that still persisted in the camps and ghettos in spite of it all.

Katherine Waite is an Editor at British Online Archives.